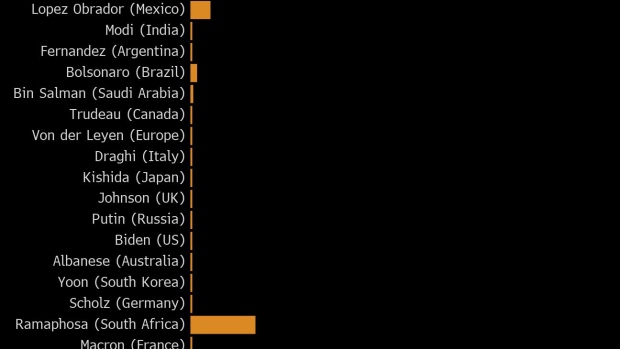 Visitors in front of a screen showing a video featuring Chinese President Xi Jinping at an exhibition marking the 25th anniversary of Hong Kong's return to Chinese rule in Hong Kong, China, on Wednesday, June 22, 2022. The rising number of Covid cases in Hong Kong has caused some unease before the July 1 handover anniversary marking 25 years since Britain returned the city to Chinese control. , Bloomberg

(Bloomberg) -- President Xi Jinping is set to finally leave mainland China after 893 days at home, even as he still trumpets a Covid Zero policy that has isolated the world’s No. 2 economy diplomatically amid rising geopolitical tensions.

The Chinese leader will nip across the border to neighboring Hong Kong on Thursday and Friday, according to local media, for events marking 25 years of Chinese rule in the former British colony. Although China has sovereignty over Hong Kong, their border has been closed since early in the pandemic -- and Xi is expected to stay overnight next door in the Chinese tech hub of Shenzhen.

Xi has halted all international travel since Covid-19 emerged, with his last trip outside the mainland -- on Jan. 18, 2020, to Myanmar -- coming days before the central city of Wuhan went into lockdown. Since then, he’s upheld a policy of eliminating cases with strict restrictions on movement and closed borders, as other nations open up.

Ties between China and the US have deteriorated during the pandemic, with clashes over imports of high-tech products such as chips, political freedoms in Hong Kong and allegations of genocide in Xinjiang. Relations with Australia have also tanked over Canberra’s call for an inquiry into the origins of Covid, and Beijing’s increased military pressure on democratically ruled Taiwan has raised tensions in the region.

Twelve leaders of the Group of 20 are in Germany and Spain this week for meetings around summits of the Group of Seven and North Atlantic Treaty Organization, where China is a key topic of discussion. The Chinese leader skipped a G-20 meeting in Rome last year and a climate summit right after, choosing to dial into both events via video link.

Xi has spoken to President Joe Biden four times since the US leader took office in January last year, relying on phone and video calls to manage the relationship between the world’s two largest economies. The Chinese president has made some 100 calls to world leaders during the pandemic.

The Beijing Olympics in February gave Xi a rare window for in-person diplomacy, as some 20 leaders -- mostly presiding over non-democratic regimes -- visited China. Australia, Canada and the UK joined a US boycott of the event over alleged human rights abuses. Still Xi held some 18 bilateral meetings, including with Russian President Vladimir Putin, whom he joined hands with to declare a “no limits” partnership just weeks before Moscow invaded Ukraine.

Since then, China has come under fire from the US over its refusal to condemn Putin’s war, with the Biden administration warning of consequences for providing either shelter from sanctions or military equipment. So far, there’s no evidence Beijing has done either.

China halved its inbound hotel quarantine to seven days earlier this week, a move seen as the first step in potentially ending the nation’s isolation. It could also be a signal the nation’s leader is ready to return China to global summits.

Liu, the politics professor, sees Xi’s Hong Kong visit as more of a domestic projection of strength than any embrace of a more outward-looking agenda.

“The major reason for going to Hong Kong is still that Beijing needs to demonstrate that Hong Kong has stabilized and they have been successful in restoring Hong Kong’s political order,” he said.