The release of U.S. oil reserves will not have a material impact: Purpose Investments CIO

In oil markets, the U.S. Strategic Petroleum Reserve has a reputation a little like the one the Russian armed forces used to have — vast and fearsome, a rival you’d be unwise to tangle with.

Russia’s aura of military invincibility was dealt a near-fatal blow over the past month in the muddy fields of Ukraine. The Biden administration should watch out: America’s most formidable energy weapon may fall flat, too.

The White House is considering a plan to release about a million barrels a day of crude from U.S. reserves for several months to brake rising gasoline prices, people familiar with the matter told Bloomberg. That may amount to as much as 180 million barrels in total, the people said.

That’s an extraordinary figure. A million daily barrels is equivalent to about 1 per cent of current global oil demand, enough to meet most of the consumption from a decent-sized economy such as Australia, Italy, Spain or Taiwan. Such an immense release — potentially six times the biggest previous outright sale from the SPR, depending on how it’s structured — would be like pressing the nuclear button on oil markets.

What happens, though, if you press the nuclear button and nothing happens?

That’s always the risk when deploying the SPR. Interventions have a spotty record: It’s as common for them to be followed by increases in prices as reductions. Even before Russian tanks rolled into Ukraine in late February, West Texas Intermediate crude was up 18 per cent since Nov. 23, when 50 million barrels were released to calm oil markets. Prices slumped 6.3 per cent Thursday to USUS$101 a barrel, but only to levels that would have been an eight-year high before March. 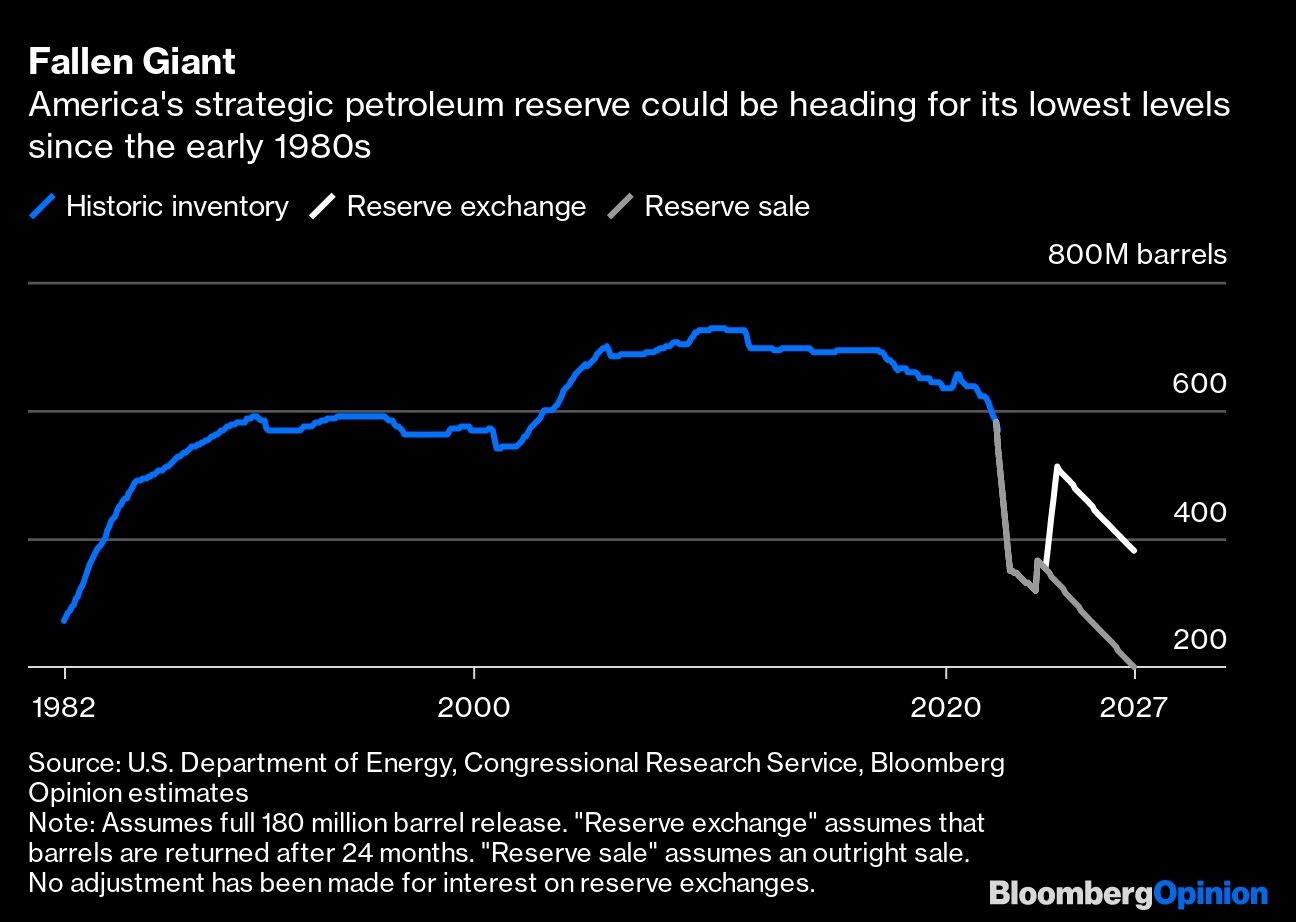 This shouldn’t be surprising. The SPR isn’t an oil producer but an unusually large pile of inventory, and in commodity markets, shrinking inventories are almost always bullish for prices. A 180 million barrel sale from the current reserve would reduce the stockpile to just 388 million barrels, the lowest levels since 1984 and barely more than half-full. Reserve sales already legislated by Congress will shrink the SPR by a similar amount over the next five years. Pile one reduction on top of the other, and America’s oil weapon starts to look distinctly rusty.

For that reason, it’s likeliest that any release would come in the form of an exchange like the November intervention, rather than an outright sale. Under that set-up, refiners would have to commit to replace the barrels they receive in the years ahead, plus interest in the form of extra crude. Such exchanges, however, have an even worse record than sales, since in the long term they draw more crude from the market than they add to it. One such program to boost heating oil supplies in the first term of the George W. Bush administration ultimately pushed up crude by about 8.5 per cent, according to a 2019 study by the Federal Reserve Bank of Dallas.

The deeper problem for Washington is that the SPR isn’t the only player in this drama, or even the most powerful one. In the U.S. alone, there’s half a dozen oil producers that generate close to one million barrels a day. The Energy Information Administration expects increased production from America’s oilfields to add 400,000 daily barrels this year and 1 million barrels next year — but if price-sensitive shale producers are dealing with competition from government reserve sales, you could expect to see those figures revised back down as they cut output. Meanwhile, America’s legislatures are stoking fresh demand for crude with promised cuts to state gasoline taxes, a move that risks blunting the price effect of any supply boost.

The bigger question is how overseas players respond. A good deal of any SPR release is likely to find its way to global markets, though the full amount may struggle to make it through the pipeline, refinery and port bottlenecks along America’s Gulf coast. 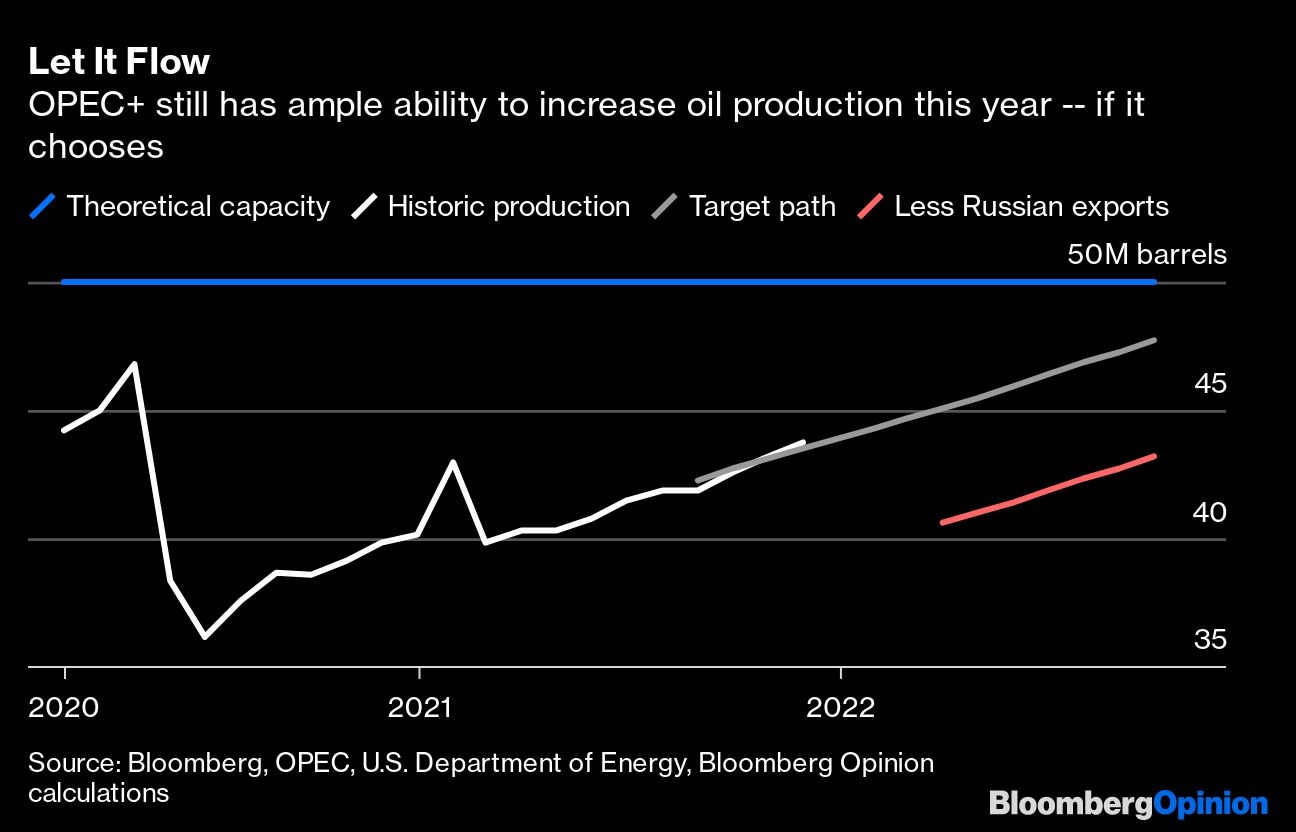 If the move has its desired effect of lowering crude costs, that’s not going to be popular with the members of OPEC+, who’ve enjoyed the effect of higher prices on depleted government coffers. The cartel’s gradual increases in production from its pandemic lows were already falling well behind their targeted levels last year. Indeed, the shortfall was not much less than the 1 million barrels a day that’s being drawn down from the SPR.

That deficit has worsened since equal-largest producer Russia invaded Ukraine, putting its 4.5 million daily barrels of exports at the mercy of chaotic sanctions implementation — but OPEC ministers have shown little interest in helping Washington and harming Moscow by lifting the pace of output growth. OPEC+ production could in theory be about 3 million barrels a day above current levels by October, when the current program is set to end — but there’s nothing to stop the group from trimming that number further in response to such an unprecedented intervention by Washington.

Should OPEC decide to call President Joe Biden’s bluff, Washington’s dominance of energy markets could be in jeopardy in a way it hasn’t been since the 1970s. With its reserve weapon heading toward half-full levels, it risks looking like a naked emperor.