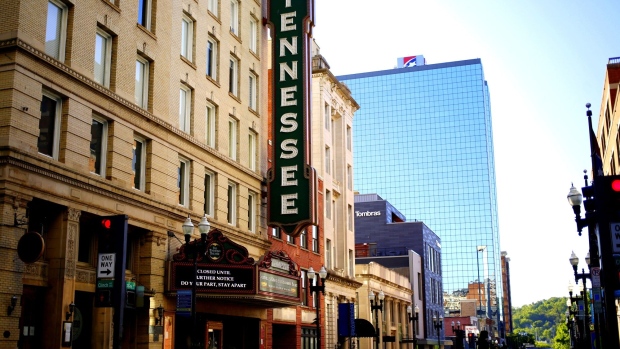 The Tennessee Theater stands closed in downtown Knoxville, Tennessee, U.S., on Friday, May 1, 2020. The Tennessee Department of Health announced Thursday that coronavirus cases across the state had reached at least 10,735, an increase of 369 cases since Wednesday, the Tennessean reported. , Photographer: Bloomberg/Bloomberg

(Bloomberg Opinion) -- It's now been two years since the rise of remote work enabled people to start moving out of the big cities, transforming the geographic demography of the United States. And while the initial beneficiaries were vacation destinations in the mountains and by the water, that growth model isn't likely to last. Housing costs and labor shortages are limiting how many wealthy migrants can move to places like Montana or Lake Tahoe.

For remote-work destinations to be sustainable, they need to accommodate both well-off migrants and the working-class population already in those communities. That adds up to an opportunity for many college towns. The smaller municipalities often are desirable places to live and already have stable local economies driven by higher education activities. But at the same time, many haven't had the kinds of employment opportunities for college graduates that larger cities do.

A generation ago, before it became a booming tech hub, that might have described Austin, Texas. Today it's places like Athens, Georgia; Knoxville, Tennessee; and Fayetteville, Arkansas — college towns that students have historically left behind after graduation. Now city leaders have a chance to either hold onto their graduates or lure them back once they are professionally established and focused on things like quality of life and cost of living.

Plenty of urban college towns provide opportunities for students and graduates alike — the aforementioned Austin; Berkeley, California; Boston — but others are nice places to live that don't have large enough populations to attract big employers of white-collar workers. Athens is only an hour outside of Atlanta, yet it is geographically and culturally distinct from Georgia's capital. Knoxville anchors a metro of almost a million people, but its largest employers are the Tennessee Valley Authority and the truck stop chain Pilot Flying J, which aren't for everyone. Similarly, Fayetteville is part of the booming northwest Arkansas region, but not everyone wants to work for its three major corporations, Walmart Inc., JB Hunt Transport Services Inc. and Tyson Foods Inc.

Despite limited employment options for college grads, all three metros have grown faster than the US as a whole for each of the last three decades, speaking both to the growth of their universities — the University of Georgia, the University of Tennessee and the University of Arkansas — and their desirability for people who are able to find jobs there.

And while home prices are rising everywhere, all three remain relatively affordable, particularly for college grads with incomes above the national average. Online searches show plenty of modest homes for sale under $400,000, with lots of undeveloped land in the surrounding area for future housing construction.

The encouraging thing about "second-tier college towns" becoming remote-work destinations is that there seems to be an opportunity for everyone to win before sparking the kind of fights over affordability and development that inevitably arise when fast growth runs into skeptical local residents.

Towns stand to benefit from diversifying their economies away from universities, even if it starts with more people working remotely rather than in corporate offices. The growth of a local talent base makes it easier for employers to eventually consider opening satellite offices. College students wouldn't have to feel compelled to immediately move to the nearest big city to secure a good job after graduation.

For the working class, an influx of new residents would bring more economic opportunity, as well as the potential to build a lot more housing to keep costs down without the land use and zoning reforms being pushed in more expensive cities.

Local leaders can get ahead of this trend by thinking of ways to foster community that connects remote workers to the local higher education economies — networking and social events, physical gathering spots that facilitate remote work like co-working spaces surrounded by amenities — and planning for housing and infrastructure growth to minimize affordability challenges.

For the three universities and communities I've mentioned, remote-work migration can amplify the growth that's already happening. For other college towns in the Northeast and Midwest, it might be a way to offset some of the challenges they are going to face this decade as shrinking pools of high school graduates threaten higher-education enrollment in the region. College towns in Ohio and Illinois can make their appeal to remote workers an economic and tax-base lifeline.

Only a fortunate few remote workers will get to spend their days looking out over the Sierra Nevadas or the ocean. Having an affordable, convenient life in a college town that previously lacked great employment options is something attainable to a lot more people and more sustainable for the local communities.

More From Other Writers at Bloomberg Opinion:

This column does not necessarily reflect the opinion of the editorial board or Bloomberg LP and its owners.

Conor Sen is a Bloomberg Opinion columnist. He is founder of Peachtree Creek Investments and may have a stake in the areas he writes about.