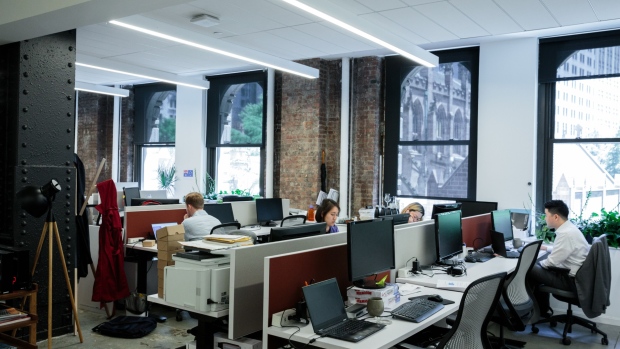 An empty office is seen. , Bloomberg

The disruptions of the COVID pandemic have prompted workers to reconsider how they can be most productive and forced companies to revisit some long-held beliefs. A few organizations are floating a new possibility: a four-day workweek.

In recent months, a diverse collection of employers including Japanese electronics maker Panasonic, fintech startup Bolt and the government of Belgium have recommended giving employees the option to work four days but get paid for five. Spain and Scotland are conducting their own trials of shorter weeks. They join a clutch of firms mainly in the tech sector that gravitated to a four-day format when the pandemic hit, including crowdfunding site Kickstarter, fashion reseller thredUp and venture capital firm Uncharted.

While most companies have always had a handful of workers on alternative schedules, it is unusual for businesses to reconsider the traditional workweek for all employees. A five-day, 40-hour workweek has been the norm for salaried workers since the early 20th century, when labor leaders pushed back against factory bosses who demanded six- or even seven-day schedules and 12- to 14-hour days.

But does a five-day system still make sense?

Companies with a four-day week option tend to trumpet their worker-friendly policies. Yet dig into the details, and “four-day week” means different things in different places. At some companies, employees might work four 10-hour days (a practice called “four tens”). At others, employees get Fridays off without working longer on the previous four days. And still others might decide to reduce the overall workload by making the days shorter — so a “four-day week” is really still a five-day week, but workers call it quits at 4 p.m. instead of at 5 or 6 p.m.

However the days are configured, researchers say, one finding stands out: Working fewer hours is better for workers and their employers.

The most recent significant study of four-day weeks was conducted in Iceland from 2015 to 2019 and involved more than 1 per cent of the population. Organizations enrolled in the study didn’t squeeze 40 hours into four days; they shortened the workweek to 35 or 36 hours. And different workplaces chose different approaches — some took every other Friday off, while others shortened the workday by an hour.

Regardless of how the hours were distributed, changing the schedule forced the organizations to rethink how work got done. They discovered ways to spend less time working while maintaining (or even increasing) output, such as holding shorter meetings or setting clearer priorities. Workers said the experiment left them with less confusion about their roles, more autonomy and more support from colleagues and bosses. Managers noticed their employees showing more discipline and focus.

The experiment was hugely popular. “For me it is like a gift from the heavens,” one manager told the researchers. Employee well-being rose, and workers reported having more time for hobbies, friends and exercise. Another key benefit was improved weekends: Shorter weekly hours meant more errands and chores got done during the week, leaving Saturday and Sunday free for leisure and family activities. And men reported more involvement at home, which reduced women’s stress levels. A gift from the heavens, indeed.

Iceland conducted the trial in part because workers were reporting working more than 40 hours a week — 44.4, to be precise. That makes Icelanders similar to the average full-time worker in the U.S., who puts in 8.5 hours a day, according to the Bureau of Labor Statistics. According to Gallup, 45 per cent of Americans work nine hours a day or more for a minimum of 45 hours a week.

We shouldn’t be surprised that cutting the length of the workday increased the quality of the work produced in addition to improving employee well-being. We lose energy (and effectiveness) as the day wears on. More than a century’s worth of studies back that up. And that’s something companies should remember before they seek a “four-day week” by cramming a 40-hour schedule into four days.

Long work days are taxing, even if they are followed by long weekends. Many people in health care work “four tens,” and many nurses work “three twelves.” While nurses will tell you that the four-day weekends are great, research shows that the long hours are hard. One study found that shifts of 10 hours or more — although often assumed to be necessary for continuity of patient care — are associated with burnout and intent to leave the profession. Mistakes are more likely at the end of a long shift, calling into question whether the practice truly delivers benefits for patients.

Another study in 2021 focused on Japanese consultants found that when people worked overtime they made more errors; shorter days were associated with better results. And a classic study of construction workers in the 1980s conducted by the Business Roundtable found that 60-hour weeks could be maintained for about two months before causing serious delays. Projects would have been completed more quickly, researchers found, had the same crew worked just 40 hours a week.

Yes, there can be benefits to pushing hard in an emergency, like a war. But even there, we run into the limits of the human mind and body. A Stanford study published in 2015 of British munitions workers in World War I found that worker output at 70 hours wasn’t much different from worker output at 56 hours.

There is also a long-term health cost to long hours. Studies of people who work more than 50 hours a week have found that overworkers have higher rates of heart disease, diabetes, depression and alcohol use. While I haven’t yet seen a study that disentangles long days from long weeks, you generally don’t get the latter without the former.

The four-day week is a worthy management experiment. But to truly make it successful, companies have to shrink the workweek, not shift it.