The oil market feels like a runaway train speeding toward US$100 a barrel. Ask oil traders in Geneva, Singapore, London and Houston, and you hear the same thing: “Buy, buy, buy.” I canvassed the market over the last few days, and there are virtually no bears left. It’s a one-way street bet: long. Jeffrey Currie, a commodity strategist at Goldman Sachs Group Inc., personifies the bullish trend: “We’re out of everything, I don’t care if it’s oil, gas, coal, copper, aluminum, you name it, we’re out of it.”

The argument, as described by Currie, is a powerful one. It’s one I’ve subscribed to for several months, particularly in oil, gas and electricity. In oil, OPEC+ is behind the curve, adding too few barrels too slowly, in the process letting inventories decline to perilously low levels. Meanwhile, investors have accumulated huge bets above US$100, US$125 and even US$150 a barrel that could act as magnets for prices.

Yet, when everyone is bullish, I get twitchy. I imagine someone, somewhere, quietly selling — and that contrarian strategy proving to be prescient in some dramatic way. Call it the oil version of “The Big Short,” the book and the movie about the 2008 financial crisis.

I know one such contrarian. He has yet to be proven right, of course; his arguments are still unconvincing. But listening to lonely bears is important, if only because you need a sparring partner to challenge your assumptions.

The bear’s name is Ed Morse, the head of commodity analysis at Citigroup Inc. Last week, he stuck his head above the parapet, telling clients to sell oil. He avoided the front of the oil price curve, however, and instead recommended shorting the Brent December 2022 contract, which was trading at the time at US$82.39 a barrel. A few days on, the trade is well under water.

For now, Morse is unfazed by the losses on his recommendation. At age 80, he says solving the “oil puzzle” is what motivates him to continue working on Wall Street. He’s seen it all: he was a senior U.S. energy diplomat during the 1970s oil crisis, and was a banker in the 2000s during the commodity super-cycle. He knows that what goes up comes down — often quick and hard.

In May 2008, with many predicting oil prices were a never-ending bullish bet, he warned that the market was looking like the dotcom bubble. For a few weeks, he was wrong, and prices rose to an all-time high of nearly US$150 a barrel. Then they crashed, hitting a low point just above US$30 a barrel in mid-December of that year. 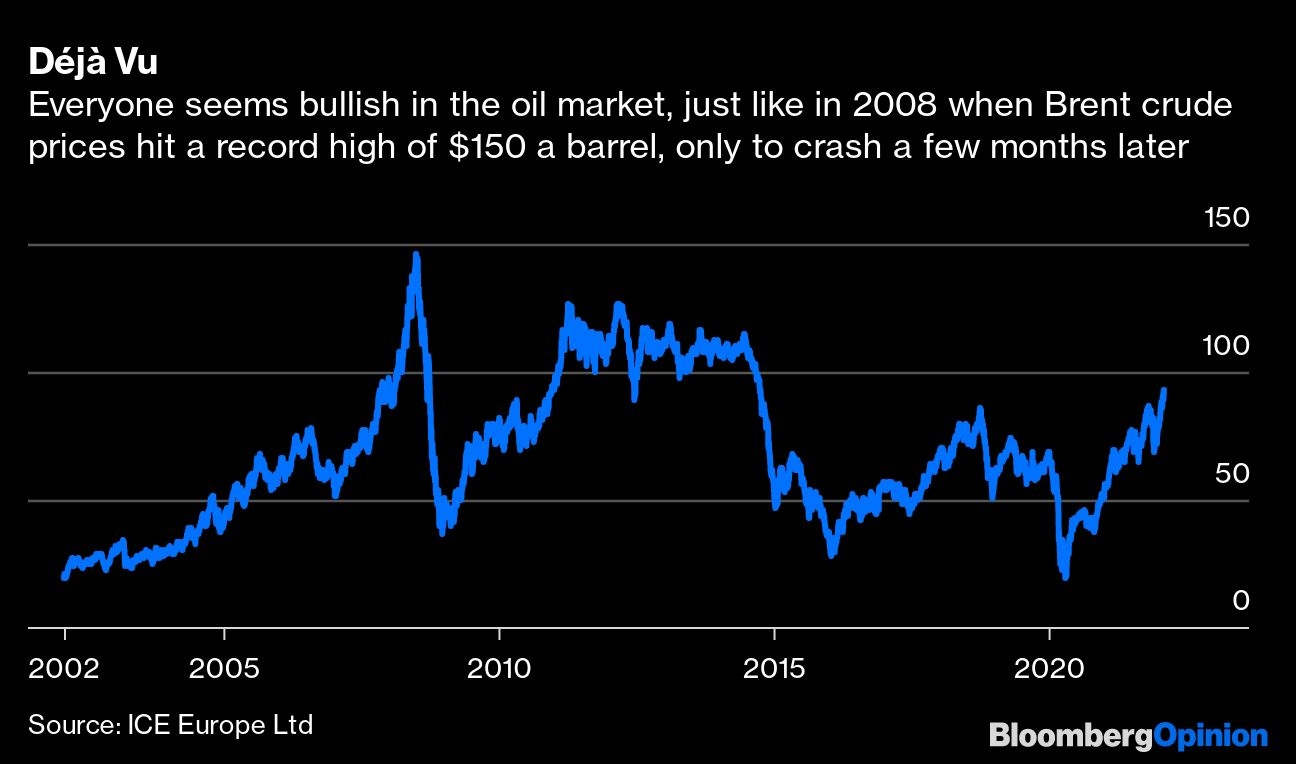 Today, Morse and the bulls agree on something: the oil market is very tight. But he anticipates a sea-change in the second half of the year. In his analysis, the market is weeks away from shifting into surplus, and will stay there for the next 15-to-18 months. The shift is due to rising production from OPEC+, the Permian and other U.S. shale basins, plus Canada and Brazil.

Morse isn’t alone warning about a coming surplus. Last week, Ryan Lance, the head of U.S. oil shale giant ConocoPhillips, told investors the Permian alone may add 900,000 barrels a day in 2022, on the high end of the expectations. “I’m absolutely concerned about” it, Ryan said. “If you’re not worried about it, you should be.”

That’s not the only potential supply surprise. The U.S. and Iran appear to be in advanced talks to restore the nuclear deal, paving the way for Tehran to return to the oil market in full. I suspect Iran has been selling more oil than many believe, smuggling thousands of barrels a day into markets in East Asia, so its return may not be that bearish. Still, a deal means more Iranian oil, not less.

OPEC+ too may do the unexpected. Nigeria, Angola and a few others may be at capacity but, if prices rise above US$100 a barrel, other members will come under domestic pressure to pump. Saudi Arabia, the United Arab Emirates and Iraq can easily add a total of 3 million barrels a day above their current output. While Russia may appear to be tapped out, it would be wrong to assume it could not produce more by June or December. Vladimir Putin needs as many petrodollars as he can get, and will push everyone to deliver.

Then there is the matter of demand. I have long thought that talk about peak oil demand was rubbish. But that doesn’t mean that consumption growth would remain as strong as it’s been as the world emerged from the COVID crisis. Neither does Morse. His recommendation to short, he says, “leans into a hawkish” change in global monetary policy, with major central banks warning about — and actually delivering — interest rate hikes. Economic growth is likely to slow and, with it, the thirst for oil.

China, however, might act as a counterbalance against waning demand from the rest of the world. And there are other unknowns to the bear scenario. Several justify, at least for now, the higher-for-longer prices. With oil inventories already at low levels, the world can ill afford any production shortfalls. However, if history has taught us anything, outages will happen. Even if Saudi Arabia and its pals can boost production, their spare capacity today is lower than it was one year ago. Add the geopolitical tension around Ukraine —  which is unlikely to go away soon — and trying to hold onto oil makes sense.

In many ways, the world seems to be one big production outage away from a price super-spike. That will prove the bulls right. But it would also kill economic growth and boost inflation, making Morse’s bet of lower prices in December likely to come true. That would make it like 2008, when both bears and bulls were right — just not at the same time.