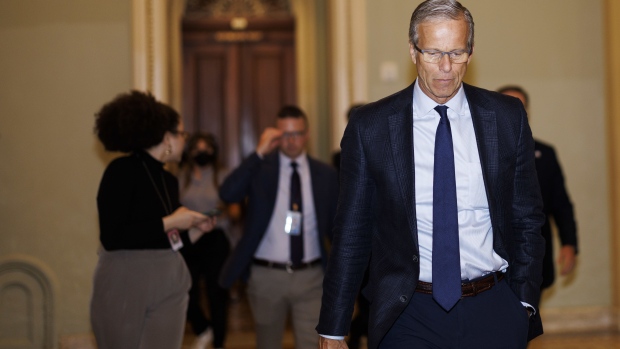 (Bloomberg) -- The White House criticized the Senate’s No. 2 Republican for saying party members want to use an upcoming debate over the US debt limit to consider changes to entitlement programs, calling the idea a “non-starter” that was rejected by voters.

Senator John Thune of South Dakota said Tuesday in a roundtable with Bloomberg reporters and editors that GOP senators could leverage a vote to increase the debt ceiling to overhaul retirement programs or at least create a commission to consider entitlement reforms.

“Telling the middle class out of the gate, before the new Congress has even begun, that working to override their will and hollow out the benefits they have earned throughout their lives is a stone-cold non-starter,” White House spokesman Andrew Bates said in a statement to Bloomberg News.

Bates said the results of the November midterm elections, in which Democrats performed better than expected, showed the public “overwhelmingly rejected efforts to gut Medicare and Social Security” and yet Thune “is recommitting to doing exactly that.”

Raising the debt limit is expected to be one of next year’s biggest political fights. Republicans have demanded spending cuts as a condition of increasing the government’s statutory borrowing limit. Similar GOP brinkmanship in 2011 put the US on the verge of default.

“Senator Thune strongly supports strengthening and preserving Social Security and Medicare for current beneficiaries and ensuring both programs remain strong and viable for future generations, period,” a spokesman, Ryan Wrasse, said in a statement. “Any suggestion to the contrary not only takes the senator’s comments out of context, but it lends itself to the old, tired fearmongering that Democrats have too often used on this issue.”

President Joe Biden has said he would “not yield” to Republican demands related to the debt limit, but also said he would not support abolishing the ceiling altogether, as some Democrats have advocated.

In his remarks Tuesday, Thune lamented that “multiple administrations” have shown little interest in changes to entitlement programs.

“There’s a set of solutions there that we really need to take on if we’re going to get serious about making these programs sustainable and getting this debt bomb at a manageable level before it’s too late,” Thune said.

The senator added that “there are things you could do in the area of Medicaid,” the health program for the poor that is administered by states.

“It’s a program that really ought to be more distributed in terms of the decision-making resources,” he said. “And, of course, there are lots of ideas about how to create more competition and options and choice within Medicare,” the health program for the elderly and disabled.

He drew a comparison to Part D of Medicare, created in 2003 to add drug plans administered by private companies. “It’s one of the few programs in my time in politics that actually cost less than what was projected,” he said.

During the midterm campaign, Biden and Democratic candidates routinely criticized Florida Republican Senator Rick Scott for floating a plan to subject almost all federal spending programs to reauthorization votes every five years, including Social Security and Medicare. Wisconsin Republican Senator Ron Johnson, who was re-elected, said the programs should be governed under annual spending bills.

Thune said bipartisan fiscal reforms could be achieved without defaulting on the national debt.

--With assistance from Laura Litvan.

(Updates with statement from Thune office in sixth paragraph)