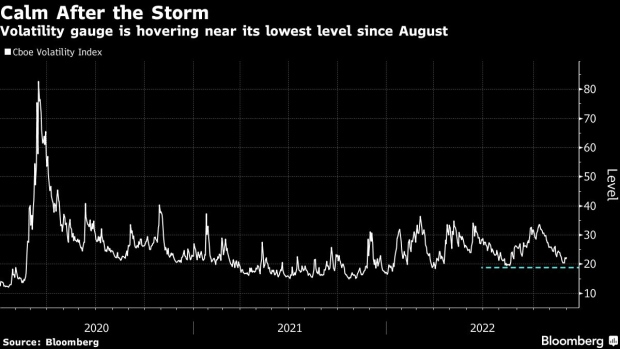 (Bloomberg) -- In lockstep with powerful market trends that have endured for the past 70 years, Wall Street for once saw it coming: With the midterm elections firmly in the rear-view mirror, the S&P 500 Index has duly enjoyed a rally once again this month -- even as the gauge posted more days in the red than in the green.

As a growing number of traders make their peace with the Federal Reserve’s policy-tightening campaign, the equity benchmark has posted two consecutive monthly advances for the first time since the summer of 2021, rising 14% in that time. After relatively dovish comments from Fed Chair Jerome Powell on Wednesday, it also jumped over its 200-day moving average for the first time since April and closed at the highest since September.

Meanwhile, the Dow Jones Industrial average rose 20% from its September low, meeting the technical definition of a bull market. And the tech-heavy Nasdaq 100 Index surged 4.6% to the highest since September.

If this rebound holds through December, the S&P 500 would end an otherwise brutal year for global money managers on a high note with its best quarterly streak since the 2020 pandemic comeback.

While mini-rallies are famously common within bear markets, the advance may sound crazy to the doom-mongers given Powell’s threat to keep monetary policy tight next year despite the growing risk of a recession. Meanwhile the outlook for corporate margins is darkening and the inflation menace still looms large. But stocks turned higher Wednesday afternoon as Powell reiterated that policymakers will downshift from their rapid pace of tightening as soon as next month’s meeting.

For all that, a case can be made that the near-term path of least resistance for stock markets is up, with fewer event risks on the horizon, easing cross-asset volatility -- and a slew of beaten-up equities that for some investors look too cheap to pass up.

Joe Gilbert, portfolio manager at Integrity Asset Management, for one, is advising clients to buy cheap small-cap companies in sectors including homebuilders, retailers and transport.

“We’re evaluating a lot of the names and industries that have been the major underperformers this year that have at least un-demanding valuations,” he said. “We think that ultimately those will be the ones that’ll be the leadership coming out of this.”

Heading into November, strategists correctly projected a bullish outcome in the event the US elections yielded a divided government that lacked the capacity to shake up the economic outlook. Key market events, including labor and inflation data as well as the bulk of corporate earnings reports, were front-loaded this month in a span of just seven trading sessions.

Since then, volatility has eased significantly, with the Cboe Volatility Index, or VIX, falling to nearly 20 last week after spiking as high as 34.53 intraday on Oct. 12.

Louise Goudy Willmering, a partner at wealth-management firm Crewe Advisors, is betting on US stocks rising over the long term. Her firm is urging clients to stay diversified by snapping up shares of health care and industrial companies as they await the outcome of the Fed’s mid-December gathering, where policy makers are expected to raise rates by a half-percentage point.

“Investors are clearly frustrated that everything came down all at once in the stock market this year, but now they’re looking at turning the page so they can reposition for what will drive markets in 2023,” Goudy said. “Inflation and interest rates were the main obstacles in 2022, but next year people think the rate of inflation will likely decrease, while the big jumbo rate moves have probably already happened, which should help support broader markets.”

Investors looking to improve their portfolio returns often turn to tax-loss harvesting late in the year, where they sell shares that have fallen in value and use the losses to help offset capital-gains tax liability to reduce overall tax bills.

With a number of beaten-down stocks looking decidedly cheap and attracting dip buyers, Bank of America Corp. is betting that biggest losers may be poised for a rebound by early 2023. Since 1986, S&P 500 stocks that were down 10% or more from Jan. 1 through Oct. 31 subsequently rose by an average of 5.5% over the next three months, beating the benchmark index by 1.8 percentage points, according to a group of strategists led by Savita Subramanian.

All told, it’s extremely rare for stocks to undergo heavy selling in December, according to The Stock Trader’s Almanac. While the first half of the month is typically weaker, the second half sees institutional investors typically snatch up bargains when retail investors leave for the holidays. In fact, the month is the third-best for the S&P 500 since 1950, averaging a gain of 1.5%, data from The Stock Trader’s Almanac show.

To Adam Sarhan, founder of 50 Park Investments, a spirited December rally is in the cards if the S&P 500 retakes it 200-day moving average, constituting a 2.1% rebound from current trading levels.

“The tide has shifted to where the market’s momentum is now in the bulls favor after the massive rally off the October lows,” Sarhan said.