Twitter is right for calling Musk out for revealing bots: Croxon

Twitter Inc. shares fell again on Monday, wiping out all the gains the stock had made since Elon Musk disclosed his stake in the social media platform.

Shares of the the San Francisco, California-based company fell 8.2 per cent to US$37.39, with the stock posting a seventh straight daily decline. It ended the session below the US$39.31 closing price on April 1, the last trading session before Musk disclosed his nine per cent stake in the firm.

Musk, who is an avid Twitter user with over 93 million followers, bid to take the company private for US$54.20 per share last month. But uncertainty around the deal, fueled in part by comments from Musk, have weighed on shares and driven doubts about whether the acquisition will be completed. On Monday, Musk said a viable deal at a lower price wouldn’t be “out of the question,” adding to speculation about whether he could seek to renegotiate his takeover.

“The stock price tells you that the deal is in severe trouble,” said Steve Sosnick, chief strategist at Interactive Brokers. “If the deal was healthy, there would be no reason for it to be trading around a 40 per cent discount to the offer price. The price is imputing a very low likelihood of the deal getting done at US$54.20, and suggesting it could fall apart.” 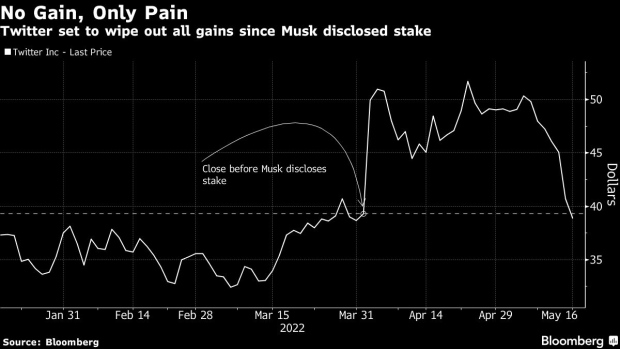 The gap between Musk’s buyout price and the market value, a proxy for confidence about whether the deal will close, widened to a record of US$16.81 on Monday.

On Friday, Musk took to the platform to claim that his offer was “temporarily on hold” to get data on the amount of fake accounts on the social media platform. He later said that he was “still committed” to the deal. The stock closed 9.7 per cent lower on Friday in its worst session since Oct. 27.

In a phone interview, Sosnick said that Musk talking about bots was a sign of buyer’s remorse, comparing it to “knowing that a house has mold, but then signing the contract without a home inspection.” He suggested Musk was trying to lower the price of the deal.

Twitter Chief Executive Officer Parag Agrawal sent a flurry of tweets on Monday detailing the company’s efforts to identify and remove spam accounts and said external estimates aren’t possible. Musk responded to Agrawal, asking how advertisers “know what they’re getting for their money?”