Twitter is right for calling Musk out for revealing bots: Croxon

Elon Musk sowed new chaos into the market over his takeover bid for Twitter Inc. on Friday, first claiming his offer was “temporarily on hold” and then maintaining he is “still committed” to the deal, sending the social media giant into a tailspin.

The billionaire initially sent an early tweet saying the US$44 billion deal is pending until he receives more information about the proportion of fake accounts on the social media site, which sent Twitter stock tumbling as much as 25 per cent in premarket trading. A few hours later he sent another tweet saying he is “still committed” to the deal. Twitter’s shares recouped some of their losses and were down 9.5 per cent at 3:25 p.m. in New York.

Musk said he was waiting for details on a recent filing from Twitter that fake accounts on the social media platform contributed less than 5 per cent of its users. Twitter said in its latest quarterly results “that the average of false or spam accounts during the first quarter of 2022 represented fewer than 5 per cent of our monthly daily active users during the quarter.” However, this data-point has been part of Twitter’s quarterly filings for almost a decade. Twitter said it applied “significant judgment” to its latest estimate, and the true number could be higher.

Twitter Chief Executive Officer Parag Agrawal, in a series of tweets several hours later, said while he expected the deal to close, the company needed to be “prepared for all scenarios.”

“I won’t use the deal as an excuse to avoid making important decisions for the health of the company, nor will any leader at Twitter,” Agrawal said.

Fighting fake accounts has been a cornerstone of Musk’s bid to reform Twitter. In a statement announcing his deal to buy the company last month, he revealed he wanted to defeat spam bots, authenticate all humans, and make its algorithms open source. Musk has also said he’d like to make the platform a bastion of free speech, taking the guardrails off of content moderation.

Bots are currently allowed on Twitter, though under the company’s policy such accounts are supposed to indicate that they’re automated. The platform has even launched a label for “good” bots, such as @tinycarebot, an account that tweets self-care reminders. Spam bots, however, are not permitted, and the company has policies meant to combat them.

Doubts have grown in recent days that Musk would be able to pull off his acquisition of Twitter, and that the entrepreneur may consider dropping his bidding price for the micro-blogging site. The whole transaction has been a frenzied and untraditional affair, largely played out on Twitter. Musk went from being “just” a prolific user to revealing a more than 9 per cent stake in the company and then launching an unsolicited takeover offer -- without detailed financing plans -- within a matter of weeks. It all came together at breakneck speed in part because Musk waived the chance to look at Twitter’s finances beyond what was publicly available.

“There will also be questions raised over whether fake accounts are the real reason behind this delaying tactic,” said Susannah Streeter, senior investment and markets analyst at Hargreaves Lansdown, “given that promoting free speech rather than focusing on wealth creation appeared to be his primary motivation for the takeover. The US$44 billion price tag is huge, and it may be a strategy to row back on the amount he is prepared to pay to acquire the platform.”

The proposed takeover includes a US$1 billion breakup fee for each party, which Musk will have to pay if he ends the deal or fails to deliver the acquisition funding as promised. It is unclear whether an update by Twitter on the number of fake accounts -- if materially larger than 5 per cent -- would trigger a so-called material adverse effect clause, releasing Musk from the breakup fee.

“Musk should have slowed down for a second and not been so rash,” said Andrew Freedman, partner at the law firm Olshan Frome and Wolosky. “He should have done what every other acquirer buying a company the size of Twitter would do and that is to do due diligence. But Musk is Musk and he’s going to do whatever he wants to do.”

The spread on the deal, which offers an indication of how much Wall Street believes the takeover will be completed, swelled further on Thursday to US$9.11 from US$8.11 in the previous session. That was the widest level since the billionaire launched his bid last month to purchase the Twitter for US$54.20 -- and double where it was last week when he announced a roughly US$7.1 billion financing commitment. 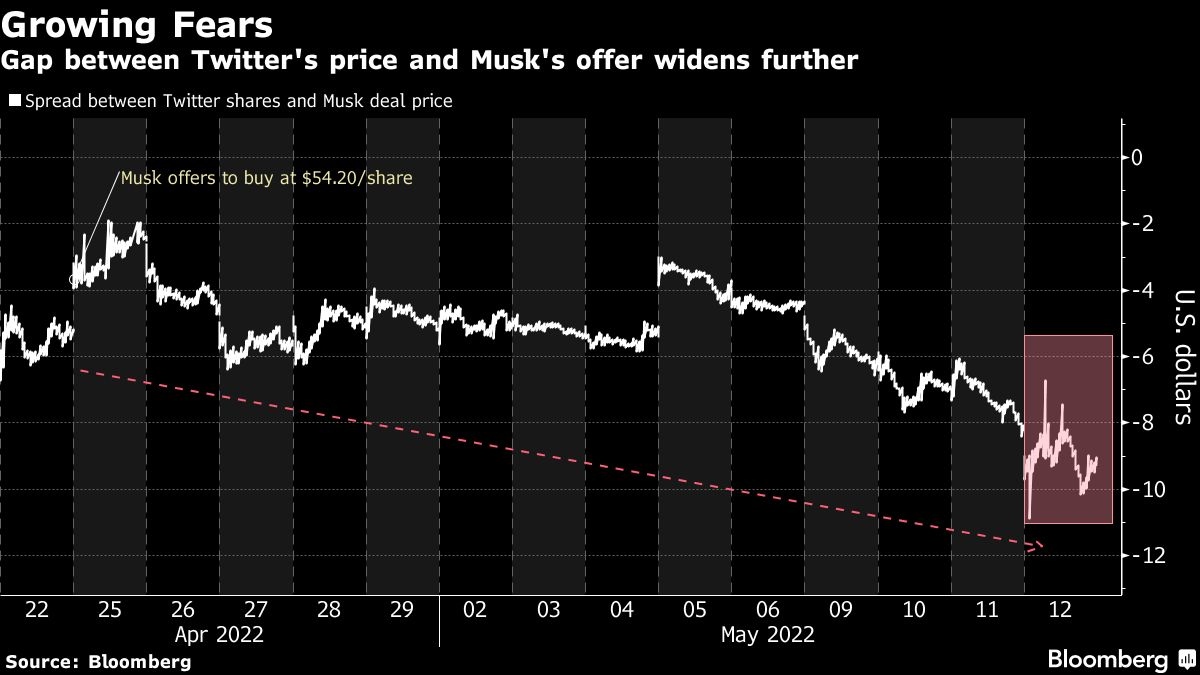 Musk’s latest tweets landed just hours after news that Twitter was freezing hiring as part of pre-deal cost-cutting efforts. Two of Twitter’s top leaders are also departing. Kayvon Beykpour, head of consumer product, and Bruce Falck, in charge of revenue product, were both asked to leave the company by Agrawal, the two executives said in separate public posts.

The changes reflect Twitter’s current state of limbo while it awaits a new owner. Hindenburg Research LLC, an investment research firm that focuses on activist short-selling, said on Monday that it sees a “significant risk” that Musk’s proposed offer gets repriced lower.

The analysts cited the ongoing meltdown in technology shares, Twitter’s own weak first-quarter results, including restating several years of user numbers, and the prospect that Musk will sell his 9 per cent stake if the deal doesn’t come together.

“This is likely aimed at negotiating a deal that’s 15-20 per cent cheaper and closer to rival Snap’s market cap. In a US$44 billion deal, Twitter’s enterprise value per daily active user of US$200 is much higher than Snap’s US$115-US$120. The transaction could become more palatable to private equity if there’s no margin loan.”

Employees at Twitter have been on an emotional roller coaster for weeks. One employee said on Friday he felt like he worked at a circus and that for the first time he was considering changing jobs.

Aside from doubts over the extent of spam bots on Twitter’s platform, the world’s richest person is still working to secure the money to actually complete the deal. Musk has been in talks with investors to raise enough equity and preferred financing to eliminate the need for any margin loan linked to his Tesla shares, according to people with knowledge of the matter.

He recently disclosed US$7.1 billion in equity commitments from investors including Larry Ellison, Sequoia Capital, Qatar Holding and Saudi Prince Alwaleed bin Talal, with the latter rolling his Twitter stock into the deal.

“Musk has never had the full funding – we know that from his constant attempts to get financial support – but he also held all the cards,” said Neil Campling, head of TMT research at Mirabaud Equity Research. “The Twitter board have been held hostage and only have themselves to blame for this mess. No other buyer will emerge – if Musk decides he is still interested he can name his price and it won’t be higher.”