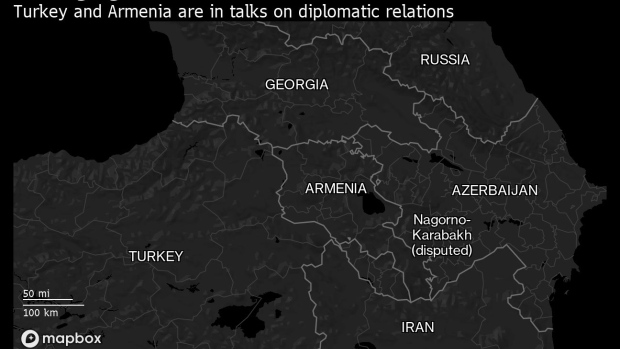 (Bloomberg) -- Turkish President Recep Tayyip Erdogan and Armenian Prime Minister Nikol Pashinyan met Thursday to hold the first talks in 13 years between the leaders of the two countries amid a push to establish diplomatic relations.

“I sincerely believe that we can achieve our goal of full normalization in our region on the basis of good neighborliness,” Erdogan told a televised presser after meeting Pashinyan. “There were certain demands and they were duly conveyed to our special envoys,” he said without elaborating. Foreign ministers of both countries were also instructed to prepare to take steps to forward the normalization process, Erdogan said.

The meeting in Prague comes as the two sides seek to overcome the legacy of decades of hostility linked to the 1915 mass killings of Armenians in Ottoman Turkey that the US, Russia, France and many other nations recognize as genocide, a characterization Ankara rejects. It’s the first encounter between the leaders of Turkey and Armenia since a failed effort to build ties in 2009.

The talks take place as international efforts also intensify to resolve Armenia’s conflict with neighboring Azerbaijan over the long-disputed territory of Nagorno-Karabakh. Turkey closed its border with Armenia in 1993 in support of Azerbaijan, and gave military support to its ally during a 44-day war two years ago that killed thousands until Russian President Vladimir Putin brokered a truce.

Since then, Pashinyan and Erdogan have started a process to try to establish ties. Azerbaijan and Armenia also began talks aimed at reaching a comprehensive peace agreement even as hundreds have died in repeated border clashes between their troops.

In the latest fighting last month, Armenia accused Azerbaijan of invading some of its territory, prompting interventions from the US and France to try to ease tensions and persuade Azerbaijani President Ilham Aliyev to pull back. Azerbaijan denies occupying Armenian territory.

Aliyev and Pashinyan are due to hold four-way talks in the Czech capital on Thursday with French President Emmanuel Macron and European Council President Charles Michel. Erdogan is also expected to meet with Macron at the informal summit of European leaders in Prague.

Armenia and Azerbaijan are striving to delineate their common border and to open up transport routes as part of the cease-fire accord. Aliyev expressed “optimism” Wednesday about reaching a peace deal.

“We are adopting a peace agenda,” Pashinyan told Armenian lawmakers in the capital Yerevan on Wednesday. “I see a path to follow.”

The clashes between Armenia and Azerbaijan “have cast a shadow over a beautiful climate,” Erdogan said Sept. 20. Still, he said, “We believe that it is possible to sign a comprehensive peace agreement between the two countries as soon as possible.”

Erdogan has argued that Azerbaijan’s defeat of Armenia means there is no longer an obstacle to establishing relations between Ankara and Yerevan. Representatives of the two sides began talks in Moscow in January and agreed in July to begin direct air cargo trade and to open their border to citizens of third countries.

The legacy of the killings of an estimated 1.5 million Armenians more than a century ago isn’t on the agenda. Pashinyan has said that recognition of the Armenian genocide “has never been a precondition” for establishing relations.

During the 2020 war, Azerbaijan took over part of Nagorno-Karabakh and reclaimed seven surrounding districts that Armenian forces had occupied for decades. Under the truce negotiated by Putin, Russia deployed 2,000 troops as peacekeepers to Nagorno-Karabakh, an enclave largely populated by Armenians that is recognized internationally as part of Azerbaijan.

(Updates with remarks from Erdogan in second paragraph)