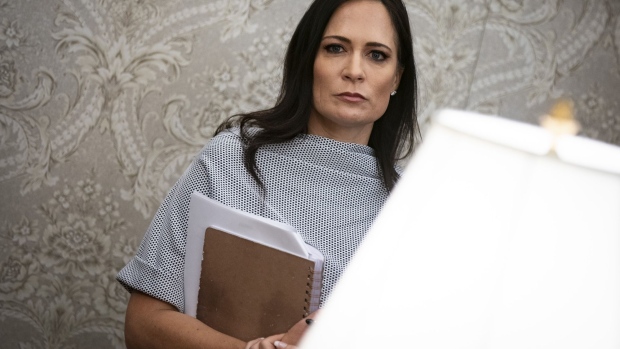 Stephanie Grisham, White House Press Secretary, listens during a meeting with U.S. President Donald Trump in the Oval Office of the White House in Washington, D.C., U.S., on Thursday, March 12, 2020. Trump said he doesn't support House Democrats' package of measures to respond to the coronavirus in its current form, as his treasury secretary is negotiating changes with Speaker Nancy Pelosi. , Bloomberg

(Bloomberg) -- Former President Donald Trump’s lawyers were told by a federal judge to “stop wasting time” after they tried halting the deposition of former White House Press Secretary Stephanie Grisham in a defamation lawsuit minutes after it began, citing her painkiller medication.

Grisham -- who famously never held a press conference and resigned her subsequent post as chief of staff to the first lady after the Jan. 6 insurrection -- was deposed Thursday in Kansas by lawyers for New York columnist E. Jean Carroll.

“Stop wasting time,” US Distract Judge Lewis Kaplan in Manhattan said to Trump’s lawyers during a brief hearing held over the phone during a break in the deposition, according to a transcript. “It goes forward.”

The sworn testimony was briefly delayed after Trump attorney Michael Madaio tried to halt the deposition when Grisham confirmed she’d taken her prescribed painkillers, though less than a quarter of her normal dose.

Trump is set to be deposed in the case on Oct. 19, though he’ll argue at a hearing Friday for Carroll’s suit to be put on hold pending the resolution of a key question on appeal. Carroll claims Trump raped her two decades ago -- an allegation Trump has denied -- and then defamed her by calling her a liar while he was in office.

Trump’s personal attorney Alina Habba said in a phone call that the effort to delay the deposition was strictly related to Grisham’s competency.

“We have proceeded with other depositions in the case this week,” Habba said in the call from Florida. “The only reason for our concern with this deposition is what the transcript indicates.”

According to a transcript of the brief hearing, Habba’s partner Madaio advised the judge that Grisham had cited her medication as a reason to avoid a deposition in an unrelated lawsuit on Sept. 23.

“She remains on the painkillers today,” he added.

“Your honor, there’s been extensive testimony about this already, and it’s really somewhat of a waste of time,” said Carroll’s lawyer Roberta Kaplan. “The injury has healed, which is exactly why, your honor, we are here in Kansas.”

Kaplan said Grisham was on 20 milligrams of the painkiller, compared to her normal dosage of 100 milligrams.

“Do you understand the questions?” the judge asked the former press secretary, who was on the call. “And are you capable of testifying?”

Grisham moved to Kansas to work against Trump in a conservative county that voted for the Republican by a wide margin, according to National Public Radio.

The next scheduled deposition in the case is for Roberta Myers on Oct. 12. Myers was editor of Elle magazine, where Carroll had a column, at the time of the alleged assault. Two other Trump accusers are also set to be deposed to demonstrate an alleged pattern of behavior by the former president.

(Updates with details of next scheduled deposition in last paragraph.)