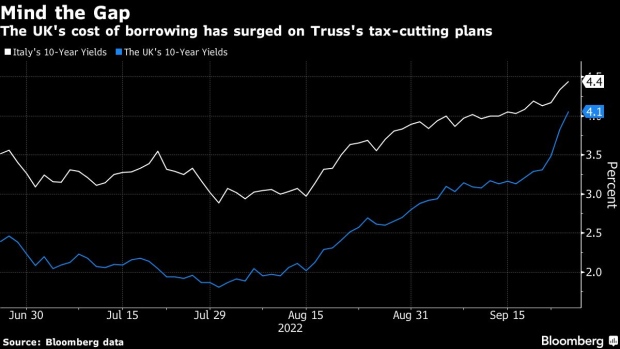 (Bloomberg) -- Analysts have been speculating for weeks about how the market would react to a victory for Giorgia Meloni in Italy’s general election but when the moment came, traders were far more concerned about a budget meltdown in the UK.

Meloni’s party, Brothers of Italy, has its roots in the post-fascist movements of the late 20th century and Meloni herself has attacked the European Union, immigrants and LGBTQ rights on the campaign trail. When she spoke to her supporters gathered at a hotel in downtown Rome in the early hours of Monday however, she struck a sober tone, telling them that Italy needs to be governed with “responsibility.”

In contrast, Chancellor of the Exchequer Kwasi Kwarteng triggered a crash in UK markets on Friday when he announced the biggest package of unfunded tax cuts in half a century and then said over the weekend that he has even more breaks to come.