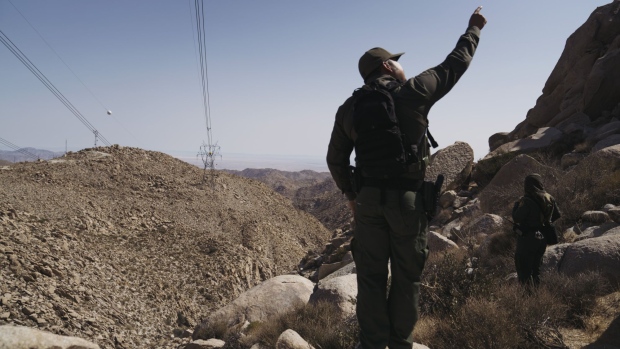 U.S. Border Patrol agents along the U.S. and Mexico border fence near Ocotillo, California, U.S., on Monday, Sept. 13, 2021. The number of undocumented immigrants apprehended trying to cross the southern border is down slightly compared to this time last month, when crossings were at a 21-year high, NBC News reports. , Bloomberg

(Bloomberg) -- Texas is doubling down on its claim that the Biden administration is worsening the migrant crisis at the U.S. border with Mexico by allowing the widespread release of undocumented immigrants convicted of non-violent crimes.

Texas and Louisiana told a federal judge late Friday the government is imperiling public safety by dumping into the U.S. dangerous criminals who should be locked up.

The states claim Biden’s lax policies directly caused the tidal wave of unauthorized immigrants that swamped Texas border crossings this year, overwhelming local communities and immigration facilities. They claim Congress ordered DHS to jail all criminal immigrants until they can be deported.

The two states started challenging Biden’s shift towards what he called a more humane approach to immigration policy soon after the new president took office. The complaint the states amended Friday is before a Trump-appointed judge in Southeast Texas, who has blocked two Biden executive immigration orders already.

In the Sept. 30 memorandum, Biden instructed immigration authorities to prioritize locking up undocumented immigrants with violent criminal histories or who represent threats to national security or public safety. He continued to de-emphasize the detention of nonviolent criminals and individuals with longstanding community ties or with final removal orders who hadn’t committed crimes.