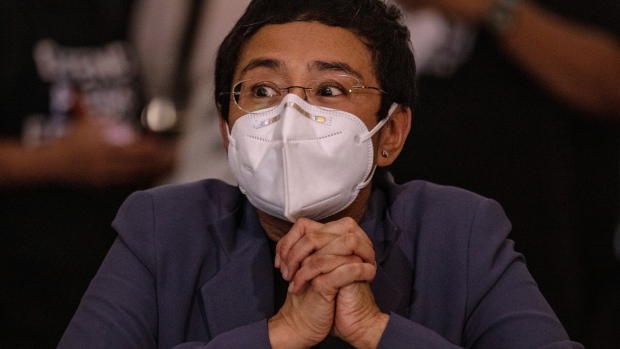 MANILA, PHILIPPINES - JUNE 15: Maria Ressa, editor and CEO of Rappler, speaks to reporters after being convicted for cyber libel at a regional trial court on June 15, 2020 in Manila, Philippines. A Manila court on Monday convicted Maria Ressa, veteran journalist and outspoken critic of President Rodrigo Duterte, for cyber libel, in a decision seen as a major blow to press freedom in the country. (Photo by Ezra Acayan/Getty Images) , Getty Images via Bloomberg

(Bloomberg) -- Philippine news website Rappler Inc. is again facing the possibility of a shutdown, after the Securities and Exchange Commission stood by its decision to revoke the site’s license to operate.

In a statement, the SEC said it’s affirming the decision it made in January 2018, when it found Rappler liable of violating the constitutional restriction on foreign ownership in mass media when it issued depositary receipts, which it said gave U.S.-based Omidyar Network Fund Inc. control over the news network.

In February of the same year, Omidyar donated the depositary receipts to 14 Filipino managers of Rappler. The donation “neither created nor transferred any right in favor of the donees which would mitigate or cure the violation already committed,” the SEC said in a statement Wednesday.

Rappler, in a statement, said it would appeal the SEC decision, adding that the proceedings were “highly irregular.” Nobel Laureate and Rappler CEO Maria Ressa also said at a conference in Honolulu that the news network would fight the order.