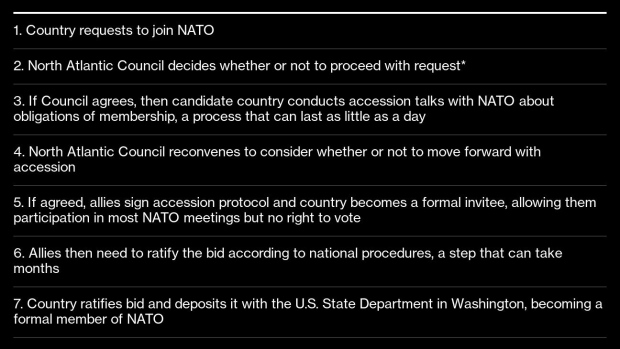 Soldiers from NATO countries take part in the Scorpions Legacy 22 NATO exercise, with participating forces from France, United States, Romania, Italy, Portugal and Bulgaria, at the Secondary Combat Training Centre in Smardan, Romania, on Friday, June 3, 2022. In the wake of the Russian invasion of Ukraine, Finland and Sweden are seeking NATO entry, and Danes Wednesday voted to join the EU's defense pact as European nations seek closer security cooperation. , Bloomberg

(Bloomberg) -- NATO leaders are set to discuss plans to overhaul and boost the alliance’s defences in the face of Russian aggression in Europe, including establishing a new force model that would put about 300,000 troops on high alert to deal with any future threats.

US President Joe Biden said in Madrid on Wednesday that his country would establish a permanent headquarters in Poland for the Fifth Army Corps, maintain an additional rotational brigade of thousands of troops in Romania and bolster other deployments in the Baltic states. The US will also send two more F-35 squadrons to the UK and add to air-defense systems in Germany and Italy. That adds to 100,000 US troops already in Europe.

“In a moment where Putin has shattered peace in Europe and attacked the very, very tenets of the rule-based order the United States and our allies - we’re stepping up,” Biden told reporters at the summit. “The steps we’re taking during this summit are going to further augment our collective strength.”

Later on Wednesday, leaders from NATO countries gathered in the Spanish capital will hear from Ukrainian President Volodymyr Zelenskiy via video conference about his nation’s battle against Russia following the Feb. 24 invasion that has left thousands dead and a quarter of the population displaced from their homes. Leaders are expected to sign off on the so-called new force model, under which NATO will pre-position more equipment, boost air defenses and earmark forces to defend specific allies and maintain those forces at a certain level of readiness.

The North Atlantic Treaty Organization already on Tuesday night moved one step closer to bolstering its eastern front with Russia after Turkey dropped its opposition to Swedish and Finnish bids to join. Once members, the Nordic countries will boost the alliance with their NATO-standard militaries and high level of integration. Both countries are also boosting defense spending.

Adding them will also shrink the vulnerability of other countries in the Baltic region with the option to quickly reinforce from the north in the event of an attack. The additional 1,343 kilometers (835 miles) of land frontier with Russia would effectively isolate its enclave of Kaliningrad sandwiched between Poland and Lithuania on the Baltic Sea.

With NATO capabilities on either side of the Gulf of Finland — about 50 kilometers at its narrowest point — allies could block Russia’s Baltic Fleet in case of any hostilities.

NATO Secretary General Jens Stoltenberg told reporters on Wednesday that the alliance would invite the two Nordic countries to join while leaders are still in Madrid.

He called the invitation “a historic decision,” with the alliance’s 30 members then due to ratify membership. “I expect that also to go rather quickly because allies are ready to make that ratification process happen as quickly as possible,” he said.

Turkey agreed to support inviting the two Nordic countries into the military alliance, after receiving pledges from Finland and Sweden addressing its security concerns, including restrictions on Kurdish groups that Turkey considers terrorists, and avoiding arms embargoes.

“The talks were intense and tough, not in mood, but in terms of the subject matter, and after four hours, we reached an understanding,” Finnish President Sauli Niinisto said. “Turkey becoming an ally now could impact the considerations” on arms export permits on a case-by-case basis, he added.

NATO membership for the two previously neutral countries would mark a significant shift in the European security landscape after Russia’s invasion of Ukraine.

Still, the actual membership process will still take many months, including ratification from NATO members’ parliaments, before Finland and Sweden become members and can benefit from the alliance’s article 5 collective defense commitments.

Stoltenberg said he expected allies to sign the Nordic countries’ accession protocols “immediately” after the summit. All 30 alliance members need to sign off.

A senior US administration official said President Biden’s goal this week was to help get the deal across the finish line. Biden told Erdogan Tuesday morning in a phone call that he should seize the moment and finalize negotiations for an agreement during the Madrid summit.

“It’s good for Sweden and Finland’s security but in equal measure it is good for NATO as we would contribute to the common security of the alliance,” Swedish Prime Minister Magdalena Andersson said in a phone interview. “Sweden and Finland were able to explain our work against terrorism and how we have tightened legislation and will continue to strengthen it.”

The US has stressed that bringing Finland and Sweden into the fold could make the alliance more secure. Turkey’s block complicated the allies’ efforts to present a united front in light of Russia’s invasion of Ukraine.

Throughout the negotiations, Finland and Sweden insisted they meet all NATO’s entry criteria.

Finland, which has a history of wars against its eastern neighbor Russia, was driven into NATO’s fold following the Feb. 24 invasion of Ukraine, and pulled neighboring Sweden along.

The attack shifted popular opinion overnight, with policy makers rapidly kicking off the process to join.

Both nations’ militaries are compatible with NATO and include a large number of artillery and tanks. Finland has held onto a conscription-based system, meaning about 900,000 citizens in a country of 5.5 million have had military training, and it’s able to deploy 280,000 of them in war time. Sweden brought back military conscription from 2018.

How Russia Pushed Finland and Sweden Toward NATO: QuickTake