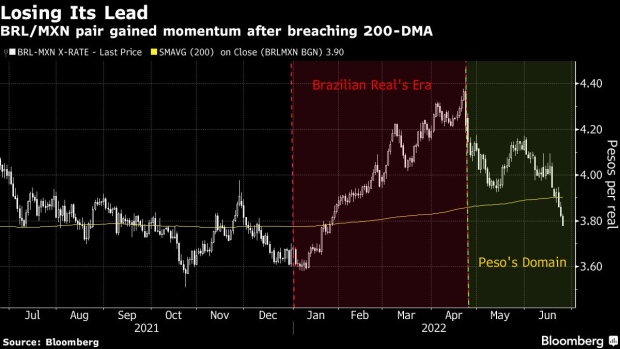 (Bloomberg) -- Traders of Latin American currencies have fallen out of love with this year’s star performer and shifted their focus northward.

Fueled by big leaps in policy rates, improved terms of trade and flows into the local stock market, the Brazilian real has been this year’s standout, at one stage rising as much as 21% versus the greenback. More recently, however, it has underperformed the region’s other big hitter: the Mexican peso. Buttressed by strong remittances, attractive volatility-adjusted interest rates and the potential for US companies to shift production to Mexico from China, the peso is climbing relative to emerging-market peers.

The Mexican currency has rallied more than 13% against the real since the end of April and it has room to advance further after breaching its 200-day moving average last week, which is a widely watched technical indicator.

The real is still the top performing Latin American currency in 2022 with a 6.5% gain, outstripping the peso’s 3.3% advance, but this lead is quickly vanishing. While in Brazil policy makers are close to putting an end to the tightening cycle -- possibly in August -- in Mexico the central bank is expected to keep raising rates for at least six more months, with some even mulling an acceleration in the pace of tightening. That will improve the peso’s carry appeal.

Brazil is also scheduled to hold a presidential election in October, which is weighing on markets. President Jair Bolsonaro is expected to keep leaning toward more populist measures as he lags former President Luiz Inacio Lula da Silva in opinion polls. These measures will likely have a prolonged fiscal impact.

In an attempt to offset the burden of higher fuel prices to consumers, the government has agreed to increase the monthly allowance in the so-called “Auxilio Brasil” social program to 600 reais ($114) from 400 reais and to pay 1,000 reais per month to truck drivers. It has also doubled aid for cooking gas expenses to low-income families. All these measures are included in a constitutional amendment that is expected to be voted in congress in coming weeks and will have a fiscal impact of 34.8 billion reais ($6.6 billion).

Bolsonaro is going to move forward with the spending policies to rally support in the election, “and that will translate into BRL weakness,” said Brendan Mckenna, a currency strategist at Wells Fargo.