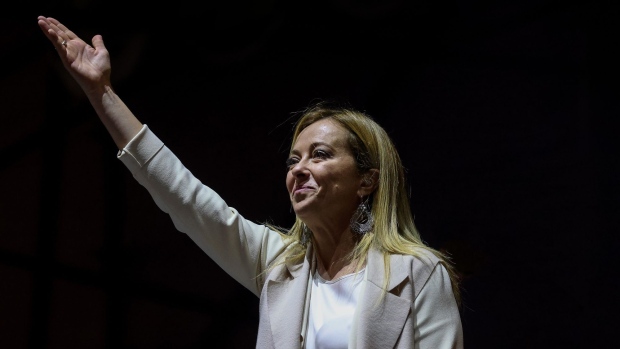 Giorgia Meloni, leader of Brothers of Italy, during a general election campaign rally by a right-wing coalition made up of Brothers of Italy, Forza Italia, and League parties, in Rome, Italy, on Thursday, Sept. 22, 2022. Italy's right-wing coalition would not seek an overhaul of the country's plan for spending European Union recovery funds, a leading member of the alliance said as investors closely watch Sunday's elections. , Bloomberg

(Bloomberg) -- Giorgia Meloni won a clear majority in Sunday’s Italian election, setting herself up to become the country’s first female prime minister at the head of the most right-wing government since World War II.

Her alliance, which also includes Matteo Salvini’s League and Silvio Berlusconi’s Forza Italia, claimed about 43% of the vote, according to projections for RAI, the public broadcaster. That would give the bloc at least 114 seats in the Senate, where 104 votes are required for a majority.

Meloni emerged from the political fringes after leading the opposition to Mario Draghi’s technocratic administration which stabilized the country over the past 18 months following the trauma of the pandemic. Yet the charismatic 45-year-old has little experience of governing and she would be taking office at a perilous moment for her country.

Italian government bonds extended their slide after the vote. The spread between Italian and German government bonds, a barometer of debt risk, widened slightly to 237 basis points. Italian stocks were little changed.

The next Italian government will face a series of overlapping crises as the energy shortages triggered by Russia’s invasion of Ukraine fuel rampant inflation and undermine growth. The hit to Italy’s finances and the prospect of more interest-rate hikes from the European Central Bank have pushed the yield on Italy’s 10-year bonds to more than 4.3% compared with less than 1% in December.

“We haven’t arrived,” Meloni told supporters in the small hours of Monday in a sober speech at a hotel in downtown Rome. “This is a starting point. And tomorrow we will have to show what we are worth.”

Once the final results are in, the next step in the constitutional process will see President Sergio Mattarella consulting with party leaders before, almost certainly, nominating Meloni to form the next government. That process could still last weeks. The new parliament, which has been downsized to 200 senators and 400 lower house lawmakers, will meet for the first time on Oct. 13.

Meloni cut her teeth in politics as a far-right activist in the 1990s and her campaigning is still marked by fiery attacks on the European Union, immigrants and LGBTQ groups. But she has also tried to reassure voters and investors that she will keep Italy’s mammoth debt under control and won’t question the country’s foreign alliances or support for Ukraine.

“The question is whether they will deviate from Draghi’s reform plan, which will impact whether the money will keep flowing from the EU,” said Geoffrey Yu, a senior FX strategist at Bank of New York Mellon in London.

Markets were reassured by preliminary results showing Meloni’s coalition would fall short of a two-thirds majority of seats in parliament, which would have allowed the alliance to change Italy’s constitution.

Meloni is likely to have a strong hand in government as she looks to reverse some of the reforms that Draghi had introduced in an effort to boost growth. Seeking significant revisions could put at risk a spending plan for about 200 billion euros ($198 billion) of pandemic recovery funds from the European Union.

Draghi has spent about 66 billion euros to help families and businesses but has resisted political pressure to expand the budget deficit. That could be one of the first dilemmas with which a Meloni government has to wrestle. The right-wing bloc has also opposed reforming the obsolete tax system and freeing up competition, two key reforms pledged by Draghi to qualify for the EU funds.

The new government will have to quickly come up with a budget plan before the end of the year to be presented both to the parliament and the European Union. Italy’s economy is likely to grow only around 0.4% next year compared to a 2.4% prediction released in April.

“This result is broadly in line with expectations and should be read as relatively market friendly,” said Francesco Castelli, head of fixed income at Banor Capital, adding that attention will now focus on who will be appointed to key government posts. Castelli warned, however, that investors would be “unwilling to tolerate euroskeptic rhetoric and quickly click on the sell button.”

The result marks a meteoric rise for Meloni’s group, the Brothers of Italy. The party claimed over 25% of the vote, compared with 4% in the last election in 2018.

Enrico Letta’s Democratic Party, Meloni’s main opponent in the campaign, came second with 19% of the vote and is set to lead the opposition. Giuseppe Conte’s anti-establishment Five Star Movement registered a late surge to claim around 16% and is likely to be another important force in the opposition.

As she looks ahead to potentially taking office toward the end of next month, Meloni will be keeping a close eye on her coalition ally Salvini, whose party underperformed with about 9% of the vote. Salvini saw himself as Italy’s next prime minister in 2019 when his party led the polls with 34%, and he has only reluctantly accepted that he has to play second fiddle to the Brothers of Italy.

“It won’t be long before the government will be tested by internal tensions,” said Giorgia Serughetti, a professor of politics at Milan University. “The poor support for the League was not expected. We should get ready for a government led by Meloni, but with a high degree of internal turbulence.”

Throughout the campaign, Salvini has taken a more aggressive line on increasing borrowing to help Italians get through the energy crisis and he has questioned the effectiveness of sanctions against Russia.

In her election night speech, Meloni thanked both him and Berlusconi for their support and the spirit in which they had campaigned as she paid tribute to her team.

“You start by doing what is necessary and then you do what is possible,” she said, quoting St Francis. “And you’ll end up achieving the impossible”

(Updates with markets in fourth paragraph, margin in tenth paragraph)