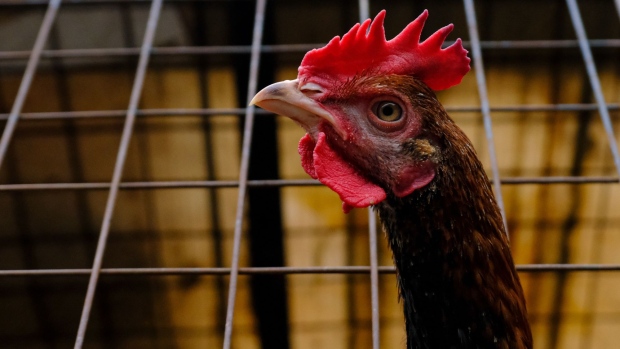 A chicken in a cage at a wet market in Sekinchan, Selangor, Malaysia, on Wednesday, May 25, 2022. Malaysia will halt exports of 3.6 million chickens a month from June 1, and investigate allegations of cartel pricing, Prime Minister Ismail Sabri Yaakob said Monday. The move is likely to hit Singapore, which sources a third of its supply from Malaysia, as well as in Thailand, Brunei, Japan and Hong Kong. , Bloomberg

(Bloomberg) -- Malaysia will extend price controls on poultry next month by reinstating maximum retail prices for standard whole chickens and eggs as part of its efforts to keep food costs in check.

The price of standard whole chicken will be capped at 9.40 ringgit ($2.10) a kilogram, and 45 sen each for Grade A chicken eggs, with the new prices taking effect from July 1, according to a statement from the nation’s agriculture and food ministry on Wednesday.

Last week, the government decided not to float the price of chicken, reversing a plan to end price caps on chicken and eggs by June 30 just days after saying the controls had led to market and supply distortions. The current maximum price of 8.90 ringgit for standard whole chicken is set to end on June 30.

The government has allocated 369.5 million ringgit as subsidy for the new price cap, Minister Ronald Kiandee said in the statement.

Malaysia, a net food importer, is struggling to keep price pressures in check with its currency hitting a two-year low last month. Official data on Friday showed the nation’s food inflation rate in May rising at the fastest pace since October 2011, adding pressure on the government to respond.

The government also decided to set up a special team to tame price pressures, Prime Minister Ismail Sabri Yaakob said in a statement after chairing a Cabinet meeting on Wednesday. The team, which will include Finance Minister Zafrul Aziz and the Economy Minister Mustapa Mohamed, will meet every Monday and Thursday.