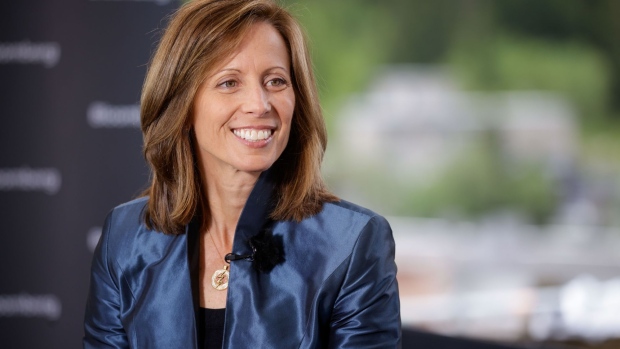 Adena Friedman, chief executive officer of Nasdaq Inc., during a Bloomberg Television interview on day three of the World Economic Forum (WEF) in Davos, Switzerland, on Wednesday, May 25, 2022. The annual Davos gathering of political leaders, top executives and celebrities runs from May 22 to 26. , Bloomberg

(Bloomberg) -- Carlyle Group Inc. has kicked off a search for its next leader after the sudden exit this week of Chief Executive Officer Kewsong Lee, with analysts and insiders betting the company will look outside to partly fill the role.

The Washington-based firm has hired Russell Reynolds Associates to do the search and could bring in an outsider to fill the vacancy and elevate an insider to co-CEO or president, according to people with knowledge of the situation. They asked not to be identified because the matter is private.

A Carlyle representative said the search is in its early days, and declined to comment further.

Lee, 57, and Carlyle’s co-founders clashed as the CEO made aggressive changes that were seen as changing the culture of the firm built by William Conway, Daniel D’Aniello and David Rubenstein, according to people with knowledge of the matter. Lee resigned Sunday, and the company’s stock has slid 9.5% this week through Thursday, extending declines this year to 37%.

Lee’s replacement will have to be someone who can work with Carlyle’s hands-on co-founders in Washington while also building a rapport with professionals in that city and New York. The person is expected to also have experience as a global business leader, rather than an investor, the people said.

Carlyle has indicated it intends to stay the course charted under Lee to expand its credit arm as well as the business that builds custom portfolios, in an attempt to expand its sources of fee revenue outside buyouts.

“They’re going to need somebody that’s comfortable with the founders having that much input and has a pretty good knowledge of the businesses that investors want to see become a bigger part of the whole,” Patrick Davitt, an analyst at Autonomous Research who covers Carlyle, said in an interview.

Here are a few of the potential contenders Wall Street is betting could fit that bill.

Nasdaq Inc.’s CEO served as Carlyle’s chief financial officer from 2011 to 2014, a three-year stint that followed her first turn at Nasdaq as finance chief. She guided both firms through their initial public offerings and initiated 2013 talks between Carlyle and Nasdaq to take the exchange private. Friedman, 53, is a protege of Rubenstein. A representative for Nasdaq declined to comment.

Waldron, 53, is president and chief operating officer of Goldman Sachs Group Inc., and Carlyle was one of his best clients during Lee’s years at the helm. His 22-year career at the bank has included stints as head of investment banking, co-head of leveraged finance and co-head of the media and entertainment banking group. A representative for Goldman Sachs declined to comment.

The CEO of JPMorgan Chase & Co.’s asset and wealth management division is considered a potential successor to JPMorgan’s Jamie Dimon, which could make it tough for Carlyle to lure her away. Erdoes, 54, is a 25-year veteran of the bank and widely recognized as one of the most powerful women on Wall Street. She rose through the ranks of asset management to the CEO spot and sits on JPMorgan’s operating committee. The bank declined to comment.

Clare, the chief investment officer of Carlyle’s private equity business, is a 30-year veteran of the firm who sits on the board and is said to have close ties with the co-founders. Clare, 57, helped build Carlyle’s Asia buyout business and distressed-debt group before being appointed co-head of the U.S. buyout division in 2011. Clare didn’t immediately respond to a request for comment.