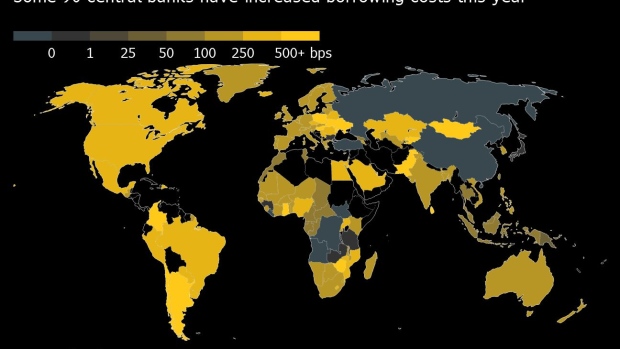 Kristalina Georgieva, managing director of the International Monetary Fund (IMF), during a Bloomberg Television interview on the opening day of the World Economic Forum (WEF) in Davos, Switzerland, on Monday, May 23, 2022. The annual Davos gathering of political leaders, top executives and celebrities runs from May 22 to 26. , Bloomberg

(Bloomberg) -- The global economy is at increasing risk of recession and it could lose $4 trillion in output through 2026, a “massive setback” roughly equivalent to the size of Germany’s economy, the International Monetary Fund’s top official said.

The situation is “more likely to get worse than to get better,” Managing Director Kristalina Georgieva said in prepared remarks for an IMF event Thursday in Washington. She cited uncertainty that remains “extremely high” after Russia’s invasion of Ukraine and the pandemic, and warned that “there could be even more economic shocks.”

The head of the lender of last resort spoke ahead of its annual meetings next week, when finance ministers and central bankers will converge on the US capital to seek solutions for global challenges such as persistent inflation, record debt that emerging developing nations are struggling to service, climate change and food security.

The IMF estimates countries accounting for about a third of the global economy will experience at least two consecutive quarters of contraction this or next year, Georgieva said.

“Even when growth is positive, it will feel like a recession because of shrinking real incomes and rising prices,” she added.

The IMF currently projects global economic growth of just 3.2% in 2022 and 2.9% in 2023. Georgieva said the latter estimate will be lowered next week.

Georgieva called on policymakers to “stay the course” to bring down inflation as a means of stabilizing economies.

“As painful as that may be this is the right thing to do. Even if the economy slows down as a result,” she said.

She also warned that the cost of a policy misstep will be high.

“Not tightening enough would cause inflation to become deanchored and entrenched -- which would require future interest rates to be much higher and more sustained, causing massive harm on growth and massive harm on people,” she said. “On the other hand, tightening monetary policy too much and too fast -- and doing so in a synchronized manner across countries -- could push many economies into prolonged recession.”

The combination of a strong dollar and higher interest rates is hitting emerging-market economies with weak fundamentals, making it more expensive for them to service their debt, Georgieva said.

Speaking in a separate interview on CNBC, Georgieva reiterated calls for creditors to restructure the debt of vulnerable nations and that China -- the world’s largest bilateral lender -- participate in these processes.

”It’s in their interest that we prevent a wave of defaults,” the IMF chief said.

Other priorities include deploying “temporary” and “targeted” fiscal measures focused on lower-income households, and supporting emerging markets, the IMF chief said at the Georgetown event.