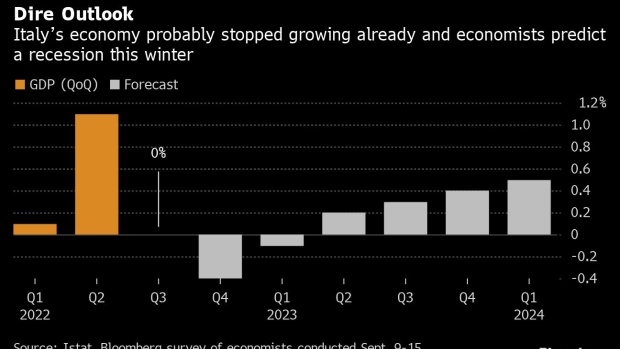 (Bloomberg) -- Giorgia Meloni struck a conciliatory tone after her election win, pledging to govern for all Italians as she was poised to lead the country’s most right-wing government since World War II.

Meloni’s coalition, which includes Matteo Salvini’s League and Silvio Berlusconi’s Forza Italia parties, was credited with about 44% of votes in Sunday’s elections, according to preliminary results from the interior ministry. A left-wing bloc trailed behind at about 26%. The right-wing alliance was on track to win a clear Senate majority.

“This is the time for responsibility,” Meloni, who heads the far-right Brothers of Italy party, said in an election night speech. “If we are called to govern the nation, we will do so for all Italians, we will do it with the aim of uniting this people, of exalting what unites it rather than what divides it.” Meloni is due to give a news conference later Monday.

One of Meloni’s first challenges will be to draft a budget plan, to be submitted to the European Union and to parliament, and to be approved by year-end. Italy’s economy is slowing down, buffeted by Russia’s invasion of Ukraine, energy price hikes and rising interest rates, and is likely to grow only around 0.4% next year compared to a 2.4% prediction released in April, according to a survey of 34 economists conducted by Bloomberg.

The spread between 10-year Italian and German bonds, a barometer of debt risk, widened to 237 basis points after the vote while the FTSE MIB index rose slightly buckling weaker stock markets in Europe on the news Meloni had a clear majority.

Salvini, whose party is weaker after sliding to about 9% in the vote, told reporters Monday that he was banking on the next government lasting the full five-year parliamentary term. “With Giorgia we’ll work together for a long time,” Salvini said. He said an energy decree to shield families and businesses hit by the energy price rises was urgent and “will be the first test for the new government.”

Salvini has called for over 30 billion euros ($29 billion) of new debt to protect households and businesses. Meloni has said this would be only a last resort.

“In our view, the distribution of power in the coalition away from the League strengthens the view that the new government will remain broadly compliant with Italy’s reform and fiscal commitments, even though the relationship with the European partners may well be tense for a while,” JPMorgan’s Marco Protopapa wrote in a research note.

After trailing Meloni’s party in the vote, Enrico Letta said he won’t be seeking a new mandate at the helm of the center-left Democratic Party, calling for a congress to select a new leader.

Investors will keenly monitor Meloni’s ideas on Italy’s spending plan for about 200 billion euros of EU recovery funds. Meloni has repeatedly said that the plan presented by outgoing premier Mario Draghi needs fine tuning. Her party’s program says the management of the funds has been “awful” and this is not “tolerable anymore.”

The country has spent 66 billion euros so far to protect families and businesses from the worst of the power price hikes and more will be needed, making it difficult to keep its mammoth debt in check.

The 45-year-old Meloni has only slight government experience, and has been rocketed to the top of Italian politics in great part thanks to her boycotting Draghi’s technocratic administration over the past 18 months, the only major party to have done so.

“Now Giorgia Meloni will have to prove herself as someone who can really tackle the deep-seated challenges of the Italian economy,” Domenico Lombardi, an economist and director-general of the conservative think tank Kypseli, told Bloomberg TV on Monday. “Let me say that being a conservative also means being conservative about the public finances of your country.”

Meloni is expected to protect and give priority to Italian companies and to protect the economy from foreign takeovers or interference. On taxes, she and her allies back the introduction of a flat tax on both income and real estate ownership.

Candidates closer to the party include former Finance Minister Giulio Tremonti, 75, who served under Berlusconi’s governments both as a minister and deputy premier. Another name from that era is Domenico Siniscalco, 68, who briefly held the title of finance minister and was director general of the treasury in conservative administrations.