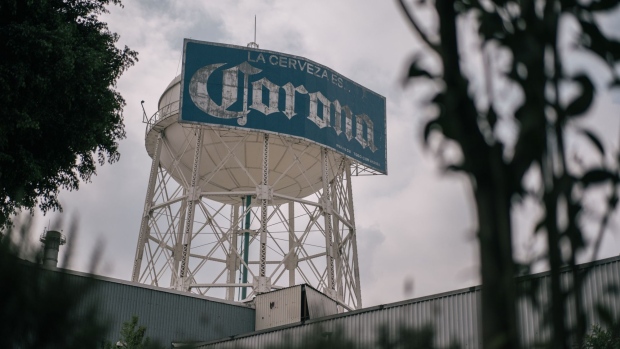 (Bloomberg) -- Constellation Brands Inc. said it has the support of the Mexican government for its existing brewery and expansion plans in Mexico.

The company, which sells Corona and Modelo beer in the US, was responding to concerns that it could be barred from using water in the country’s arid north. President Andres Manuel Lopez Obrador and the Mexican government “have expressed full support for our existing brewery operating plans in Mexico,” the company said in an emailed statement. Those plans include construction of a plant in Veracruz state, along the Gulf coast.

Lopez Obrador said yesterday that Mexico, the world’s largest beer exporter, should stop making beer in the country’s north amid severe water shortages. “This is not to say we won’t produce any more beer, it’s to say that we won’t produce beer in the north -- that’s over,” Lopez Obrador said during a press conference. “If they want to keep producing beer, increasing production, then all the support for the south or southeast.”

Constellation said it’s engaged in “ongoing discussions” about the construction of a plant in Veracruz. “We are working together to start construction of our new brewery in Veracruz in an area with ample water supply and a capable workforce,” the company said.

Constellation’s plans for a Veracruz plant follow the rejection of a brewery in Mexicali, in the northern state of Baja California. The abrupt suspension of the project resulted in a $666 million impairment charge, recorded in the first quarter of fiscal 2022.

The company’s investments in Mexico are key to its growth strategy. In addition to the Veracruz plant, it seeks to expand and optimize existing production sites in Nava and Ciudad Obregon, both of which are located in Mexico’s north, according to a June regulatory filing. Constellation estimates that it will spend $1.2 billion in its current fiscal year to expand Mexico operations.

JPMorgan analyst Andrea Teixeira said that it’s not the first time Lopez Obrador has expressed concern over drought in Mexico’s north. “We see yesterday’s comments as largely in line with previous rhetoric,” Teixeira said. She added that “political risk is always a concern, particularly as water rights issues have already derailed the planned Mexicali brewery.”

Constellation, which is rated overweight by JPMorgan, is experiencing strong demand, Teixeira wrote. She estimates that 75% to 80% of the company’s production currently comes from Nava, and said that while its Ciudad Obregon operations are also in the north, the president’s comments seem focused on Nuevo Leon state, where the drought is having more of an impact.

Constellation said it’s also working with authorities to restore watersheds and provide ample access to water in Mexican communities where it operates.

Heineken NV, which owns the Sol and Tecate beer brands, will likely continue to operate unhindered, Jefferies analyst Edward Mundy wrote in a research note. “We do not believe that Heineken Mexico’s supply chain will be adversely impacted by commentary at the press conference,” he said.