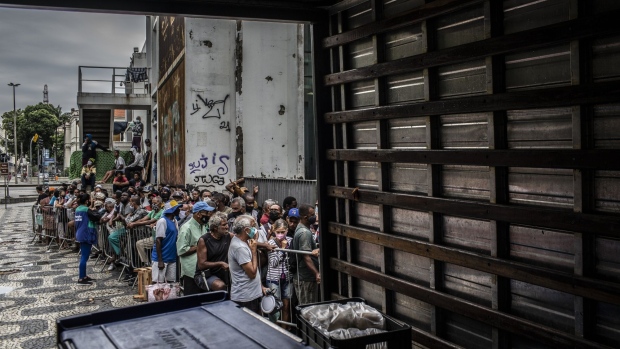 People stand in line to receive food outside the Biblioteca Parque Estadual in downtown Rio de Janeiro, Brazil, on Thursday, April 29, 2021. The Covid-19 pandemic has sent a wave of poverty racing across Latin America, deepening declines that began over the past decade and consigning millions to lives of deprivation. , Bloomberg

(Bloomberg) -- Brazil’s next president will have to temporarily increase public spending to fight poverty and unemployment, according to a close economic adviser to Luiz Inacio Lula da Silva, who leads opinion polls ahead of the October vote.

Nelson Barbosa, a former finance minister during the administration of Dilma Rousseff, a Lula ally, said financial markets have already realized that the current rule limiting the growth of public expenditures to the inflation rate “is unfeasible.” The so-called spending cap was created without effective mechanisms that would allow the government to comply with it, and needs to be replaced as part of a wider overhaul of Brazil’s budget laws, he said.

“Poverty has increased, so it will probably be necessary in the short term to increase cash transfers” to the poor, he said in video interview from home, where he recovered from Covid-19. “For this fiscal expansion to be compatible with the stability of the economy, it has to come within a broader fiscal framework and as part of a strategy that may increase public debt in the short term, but stabilize it later on.”

He didn’t say how long it would take for Brazil’s debt ratios to stabilize.

Concerns about the country’s fiscal outlook have been weighing more heavily on financial markets since President Jair Bolsonaro got congressional approval to change the spending cap’s calculation, making room for additional expenditures this year, as he battles the spread of a new Covid-19 variant during re-election campaign. Investors worry that more concessions will be made as public servants threaten a strike to pressure for pay raises.

Swap rates on medium- and long-dated contracts rose as investors reacted with concern to Barbosa’s remarks about the spending cap. The contract maturing in January 2025 jumped as much as 18 basis points to 11.41%.

Barbosa is part of a group of left-leaning economists who have advised Lula since Rousseff, his successor, was impeached in 2016. They have started to meet more regularly as the former president prepares to run in this year’s election, but discussions remain at early stages and there is no consensus on all topics. “When the time comes, politicians will make a decision” on issues of dissent, he said.

One of the non-consensual topics is what could replace the current spending ceiling. Simply revoking the rule, as suggested by some of Lula’s advisers, would be a mistake, Barbosa said. Instead, he advocates for a different cap linked to the growth of gross domestic product rather than inflation, and with separate limits for public servants’ salaries and government investment. Such a cap would be announced at the beginning of every presidential term.

“The rule must have a clear limit for payroll,” Barbosa said, adding that it may allow for some growth of that expense, but not an explosive one.

Currently, any increase in public servants’ wages would put additional pressure on the entire budget, leaving virtually no room for government investment.

Another theme without broad consensus among the team of Lula’s economists is how a much-delayed overhaul of Brazil’s tax system should look like. Barbosa said the country will probably have to move in line with the rest of the world and implement a more progressive system that imposes higher taxes on those with greater ability to pay.

“Brazil may end up being pushed to make this reform because it is a worldwide movement,” he said. “Most countries have reduced taxation of retained earnings and offset this by taxing distributed earnings; Brazil has already signed an international agreement that is moving toward this.”

Rising fuel prices is another theme of discussions. Rather than intervening at the pricing policy of state-owned oil firm Petroleo Brasileiro SA, Barbosa would favor a mechanism to soften price swings.

“As an economist, I think all price controls end up going wrong. Smoothing mechanisms are required,” he said.

(Update with market reaction in)