A selloff in cryptocurrencies resumed Monday, with Bitcoin dropping back below US$30,000 with global equity markets remaining under pressure.

The largest cryptocurrency fell as much as 6.2 per cent and was trading at US$29,835 as of 4:54 p.m. in New York. Other tokens including Ether and Avalanche were on the back foot too. U.S. equities fell as investors assessed the latest signs of economic malaise from the U.S. and China.

Overall, however, digital-asset markets were still calmer compared with the worst of last week’s turmoil over the collapse of the TerraUSD, UST, stablecoin. Deus Finance’s DEI token lost its peg to the dollar on Monday, though it only had a market value of about US$63.5 million, compared with about US$18 billion for UST.

“I think it will continue to trade with the equity market and risk assets,” said David Donabedian, chief investment officer of CIBC Private Wealth Management. “That’s the big lie that’s been exposed, the idea that it’s some new asset class that’s going to help diversify your portfolio has been blown to smithereens.” 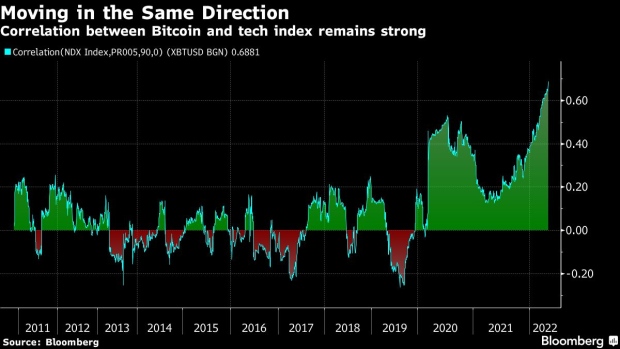 Bitcoin dipped to a low of US$25,425 on Thursday after the TerraUSD algorithmic stablecoin unraveled, throwing the entire ecosystem that supports it into disarray. At its height, the market panic engulfed the US$76 billion stablecoin Tether, a key cog in cryptoassets that briefly dipped from its dollar peg. 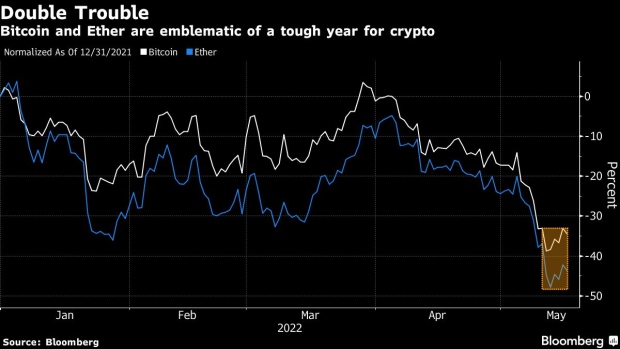 “We have witnessed the rapid decline of a major project, which sent ripples across the industry, but also a new found resiliency in the market that did not exist during the last market downswing,” Changpeng Zhao, chief executive officer of crypto exchange Binance Holdings Ltd., tweeted on Sunday.

One difference between the current environment and other prolonged downturns such as the “crypto winter” in 2018 is the amount of institutions now involved in the market, which may be a source of support, said Paul Veradittakit, an partner at digital asset manager Pantera Capital.

“Compared to 2018, there are more institutional investors with exposure to crypto and most see this as a buying opportunity,” said Veradittakit.

Monday’s price action saw Bitcoin give back some of a Sunday rally. The total market value of cryptocurrencies has dropped by about $326 billion in the past seven days to roughly US$1.33 trillion, according to data from CoinGecko. Bitcoin is some 57 per cent off its November all-time high.

While crypto markets may have digested the worst of the TerraUSD fallout, the asset class faces other challenges -- most notably, rising global interest rates and tighter liquidity conditions.

Bitcoin’s current lower support is at US$27,000, “which can likely stabilize price action in the coming days,” said Edul Patel, chief executive officer of Mudrex, an algorithm-based crypto investment platform.