The crypto world has been riveted by the rapid collapse of the TerraUSD stablecoin. But its implosion may bring about something just as noteworthy: the death of a major blockchain.

The Terra blockchain -- the platform supporting scores of decentralized applications that let users swap crypto coins and earn yields -- was halted and then restarted twice in recent days, as the value of its main cryptocurrency, Luna, and the related TerraUSD (UST) stablecoin collapsed following a wave of selling pressure. Along the way, incentives for various parties to support the chain evaporated, sending the ecosystem that nurtured more than 110 applications connected with more than 4 million digital wallets into disarray. While the chain is running again and there are efforts in the works to keep it working -- including a new plan proposed Monday by co-founder Do Kwon to start up a new version of the blockchain without UST -- the attempt may prove futile with Luna near zero. Meanwhile, many of its functions have been disabled.

“Terra in its current form is dead for all practical purposes,” said Kyle Samani, co-founder of Multicoin Capital. 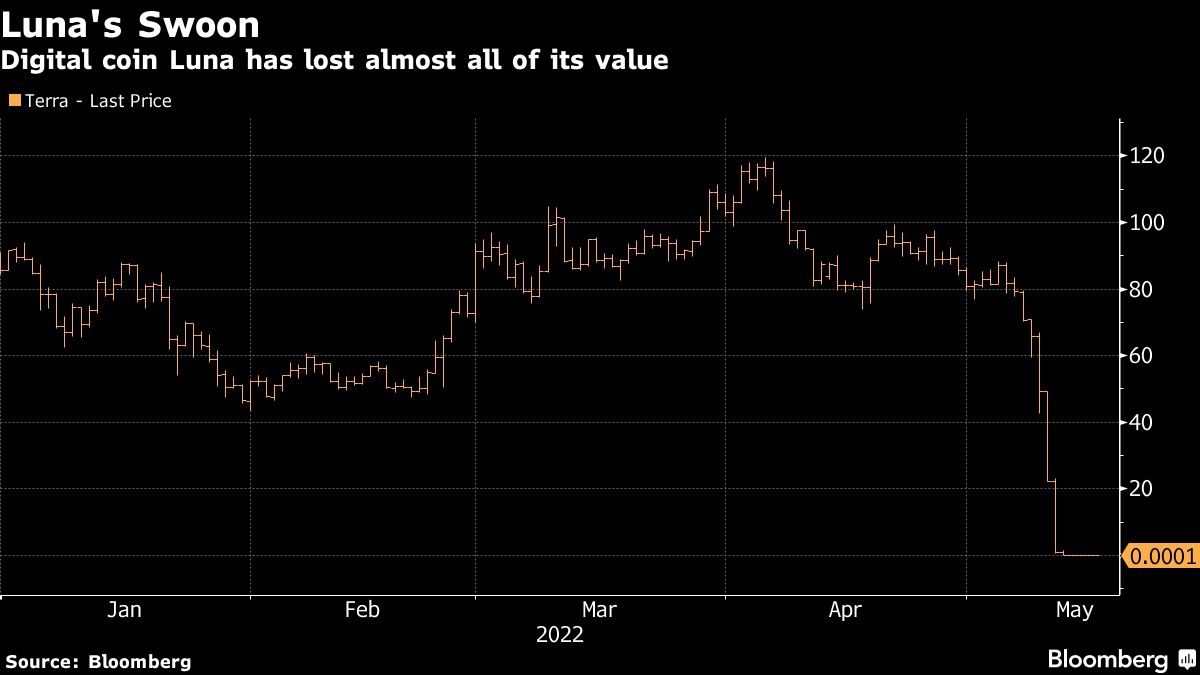 The demise of a crypto ecosystem of the size and depth of Terra -- once valued at more than US$40 billion -- would mark a milestone in the history of blockchain, the digital-ledger technology that was initially created to support Bitcoin more than a decade ago and is now the bedrock of the myriad cryptocurrencies that have cropped up since.

Scores of smaller blockchains have turned into the walking dead before, with their coins trading for less than US$1 and only a sprinkling of users -- victims of poor design, conflicts among developers or hacks. They still have a smattering of loyal fans, many of whom dream the networks will one day come back and their coins’ values will skyrocket, making them rich. Now Terra is facing the same predicament, but on a much grander scale.

“I think volume will dry up and it will trade infrequently, then die,” said John Griffin, a finance professor at University of Texas at Austin. “Once there is no economic incentive to maintain the blockchain, someone turns off the electricity.”

Essentially, a blockchain is a database that can host hundreds or thousands of applications and record related financial transactions. They are typically open-source, created by and improved on by a community of developers and supported by operators of computers that verify transactions and get rewarded with tokens or coins specially created for use on that particular blockchain. The tokens can also function as rewards for improving code, developing new apps and so-called staking, when holders provide their coins to a computer operator ordering exchanges in exchange for earning yield. And investors often receive a blockchain’s native token or a related coin in exchange for their financial support.

Blockchains, then, are fragile financial ecosystems of validators, users, developers, investors and others, with their participation directly linked to the chain token’s well-being and appreciation. The expectation is that as more participants get involved and activity increases, coin values will increase, attracting more users and creating a virtuous circle. But if a chain’s token collapses, everyone’s economic incentive to support the chain evaporates, too. If the loss of value appears to be permanent, only a few ideological fans remain -- everyone else leaves. That’s how a blockchain can end up dying.

In the case of Terra, one of the network’s cornerstones was its UST stablecoin, which stopped working as intended about a week ago. UST was designed to use algorithms and trader incentives in relationship with Luna to keep a 1-to-1 peg with the dollar, but these mechanisms broke down as selling hit UST, triggering even deeper declines in Luna.

With Luna’s value collapsed, actvity is drying up across the blockchain. Staking has all but stopped: Only 0.01 per cent of all Luna is staked nowadays, according to tracker Terra Station. Terra’s total value locked in apps such as the DeFi platform Anchor Protocol has fallen precipitously, sliding from more than US$31 billion as recently as April into negative territory, according to DeFi Llama, another tracker. And the Terra Dapp Expo -- an event slated for June and designed to showcase the blockchain’s thriving developer ecosystem -- has been canceled.

“Need a week or two to think about what’s going to happen next,” developers from Nexus Protocol, which helps Terra users earn yields, told Bloomberg in a message via Twitter. “Our team is grieving, our community is grieving.”

Polygon, a rival blockchain project, is already seeing an influx of developers fleeing Terra, said Mudit Gupta, chief information security officer at Polygon, He said he’s already spoken to six projects from the Terra ecosystem and about 25 developers who are considering moving to another network.

“A chain is considered dead when new developers are not coming to build on it and existing developers gradually move out,” Gupta says.

Not everyone has given up the chain for dead. Terra’s co-founder, Do Kwon, is still attempting to revive the effort and come up with plan B. Initially, there were hopes of a UST bailout; but those hopes have died.

Kwon has proposed reconstituting the chain while admitting that “we will lack the ecosystem to build back up from the ashes” of Luna. But even some of Terra’s onetime investors don’t like the idea of changes such as forking -- copying the existing blockchain to start afresh.

As revival hopes continue among Terra’s diehards, “the final demise could take quite a while, but the only direction from here is down—absent a miracle,” said Aaron Brown, a crypto investor who writes for Bloomberg Opinion.