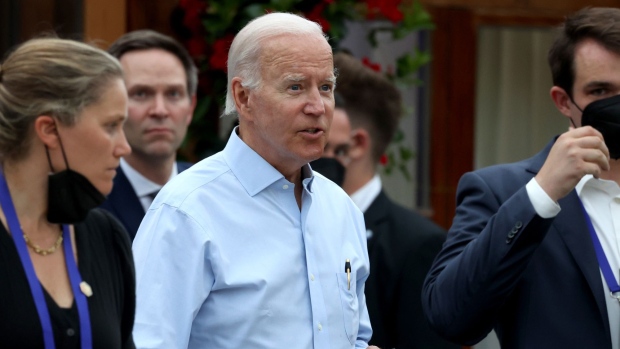 US President Joe Biden on day two of the Group of Seven (G-7) leaders summit at the Schloss Elmau luxury hotel in Elmau, Germany, on Monday, June 27, 2022. G-7 nations are set to announce an effort to pursue a price cap on Russian oil, US officials said, though there is not yet a hard agreement on curbing what is a key source of revenue for Vladimir Putin for his war in Ukraine. , Bloomberg

(Bloomberg) -- President Joe Biden’s administration isn’t asking countries in Latin America to pick between working with the US or China and is instead focused on asserting a competitive investment and lending agenda that meets the region’s needs, a top aide said.

The US is putting forward support that China and Russia can’t offer, which includes galvanizing countries around challenges such as addressing climate change and the global pandemic, said Juan Gonzalez, special assistant to Biden and the senior director for the Western Hemisphere on the president’s National Security Council.

The administration’s agenda also includes changing multilateral development banks to respond to the needs of middle- and high-income countries, Gonzalez said, drawing a distinction between that and China’s focus on buying commodities from the region. The US is the largest shareholder in the Inter-American Development Bank, or IDB, and the World Bank.

“US diplomacy has to be competitive,” Gonzalez said in a virtual event hosted by Georgetown University’s Americas Institute on Tuesday. “We can’t wag our finger to say ‘Well, you can’t go with Huawei, but there are no other competitors that are offering to build your 5G infrastructure.’ We have to put forward an affirmative agenda to respond to the region’s needs.”

The Trump and Biden administrations have used export controls to try to prevent China’s Huawei Technologies Co. from accessing cutting-edge semiconductors, viewing the company as a threat to US national security, and the Trump administration pressured other countries to stop using the company’s equipment.

Biden earlier this month hosted more than 20 heads of government from Latin America and the Caribbean in Los Angeles for the Summit of the Americas. Countries used the gathering to sign a migration accord and announced economic, health care and climate policy measures for the region.

At the summit, Biden also said that his administration is ready to put more capital into the Inter-American Development Bank to encourage private-sector investment in Latin America.

Gonzalez contrasted the US support and prioritizing of democracy in the region with a lack of transparency in Chinese investments, as well Chinese vaccines that were sold rather than donated. He highlighted the US comparative advantage in providing the region with next-generation infrastructure and building digital connectivity.