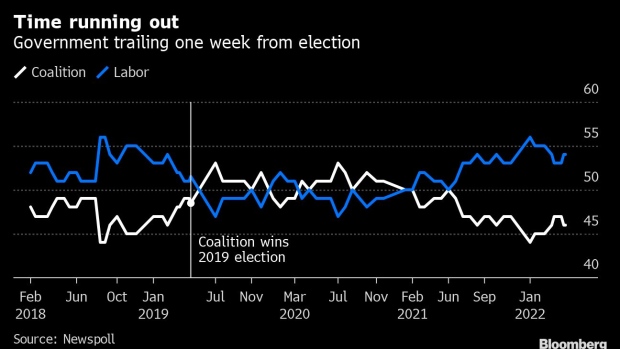 (Bloomberg) -- Australian Prime Minister Scott Morrison made an impassioned pitch for his center-right government to be re-elected for a fourth term less than one week from a national election, with polls pointing to an opposition victory.

The Liberal National Coalition government held its official campaign launch on Sunday in Brisbane, Queensland, a state that is crucial for Morrison’s party for any possibility of victory in the May 21 election.

Speaking in front of a crowd of loyal supporters on Sunday, Morrison said “Australia has prevailed” in the face of a pandemic, a global economic downturn and climate change-fueled natural disasters.

“We stand on the edge of a new era of opportunity, better days are now ahead, but we cannot take it for granted,” the prime minister said.

Morrison’s government will seek re-election on the back of a strong economy and record-low unemployment; while the Labor opposition is pointing to a “cost-of-living crisis” in Australia with rising inflation and low wages.

Morrison’s party has held on to power with a slender one-seat majority in Australia’s 151-seat parliament in the past three years, but latest opinion polls show a swing in public sentiment, pointing to an emphatic victory for the opposition in Saturday’s election.

A survey on Friday showed the Labor Party leading the Coalition by 54% to 46%, a result that would give Anthony Albanese’s opposition about 85 parliamentary seats, according to The Australian newspaper.

Still, Morrison has defied public opinion before. In 2019, he was widely expected to lose the election before pulling off a surprise win that he described as a “miracle.”

Ahead of Sunday’s launch, Morrison announced a new housing policy aimed at allowing older Australians to downsize their homes while putting new funds into their retirement savings. The government said the policy would boost superannuation while freeing up property stock for first-home buyers.

Deputy Prime Minister Barnaby Joyce and Treasurer Josh Frydenberg spoke ahead of Morrison at the event, both urging Australians to stick with the Coalition.

Frydenberg is struggling to hold his seat in the state of Victoria where he faces a challenge from a pro-climate action independent candidate. The treasurer told the party faithful that Australia’s economy was performing well despite “the greatest economic shock since the Great Depression.”

“We have an economic plan that is working, with a faster and stronger economic recovery than all major advanced economies around the world,” he said.