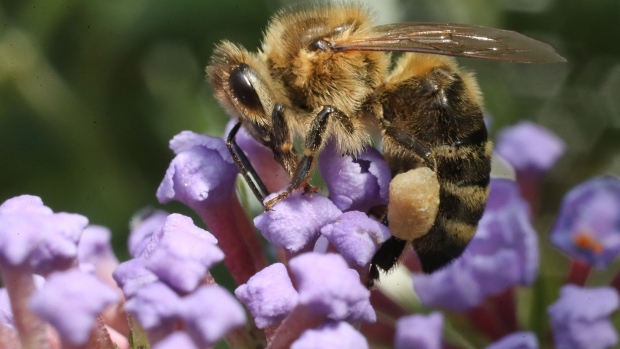 (Bloomberg) -- Australia is racing to protect honey bees after the discovery of a mite that has ravaged hives around the world sparked fears for the pollinators crucial to the country’s A$83 billion ($57 billion) agricultural industry.

Biosecurity officials in New South Wales, the most populous state, have imposed a bee lockdown following the detection of the Varroa destructor mite at the Port of Newcastle on Friday. The incursion threatens Australia’s status as the only major honey producer to have avoided establishment of the deadly pest, which has been blamed together with the widespread use of neonicotinoid pesticides for colony collapse in the US.

Eradication plans will be enacted in a 10 kilometer (6.2 mile) emergency zone around the port while no bees are allowed to be moved across the state. The discovery is a serious concern for producers of Australian honey products, which often reap hefty premiums in overseas markets including Asia, as well as for growers heavily reliant on commercial honey bees for crop pollination.

“If varroa mite settles in the state, it will have severe consequences, so we’re taking every precaution and action needed to contain the parasite and protect the local honey industry and pollination,” New South Wales Agriculture Minister Dugald Saunders said.

Heavy infestations with the varroa mite cause a range of maladies among European honey bees that weaken and reduce populations, leading to colony death. The parasite does not affect smaller, stingless native bees.

Death rates among honey bee colonies have been a concern for decades around the world, and are attributed to issues ranging from extreme weather and crop-chemical exposure to parasites. Australia also exports European honey bees, including to Canada -- where agricultural producers are currently grappling with the fallout from a plummeting bee population.