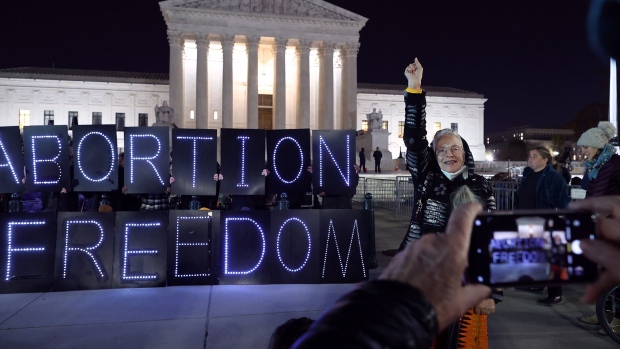 (Bloomberg) -- The most consequential abortion case in a generation comes before the U.S. Supreme Court Wednesday, as the justices weigh Mississippi’s ban on abortion after 15 weeks of pregnancy and consider gutting the landmark Roe v. Wade ruling.

Even if the court doesn’t explicitly overturn Roe, the 1973 ruling that legalized abortion nationwide, a decision upholding Mississippi’s law would have a far-reaching impact. It would give states new license to curb abortion access, guaranteeing tighter restrictions in much of the country.

The argument, which starts at 10 a.m. Washington time, centers on a law that is far more stringent than anything the court has previously upheld and all but impossible to square with Roe and other abortion precedents.

With a 6-3 conservative majority on the court, abortion opponents have a chance to achieve their long-sought goal of overturning Roe and putting the issue back under state control.

Mississippi contends that Roe and the 1992 Planned Parenthood v. Casey ruling are “egregiously wrong” decisions that have proven unworkable and only inflamed the abortion debate.

The 7-2 Roe decision said abortion protections were covered by the “right to privacy,” a doctrine the court established in earlier cases, though the Constitution doesn’t expressly use those words. The court re-affirmed Roe in Casey, while modifying the legal test. Casey said states can’t impose an “undue burden” on abortion access until fetal viability, a point the court suggested was around 23 or 24 weeks at the time.

Reproductive-rights advocates say women have come to depend on availability of legal abortion, contending that access is critical for their ability to participate equally in society.

“Nothing in the years since Casey was decided has rendered individuals’ rights to make basic decisions about their bodies and their lives any less worthy of constitutional protection,” said Julie Rikelman, the Center for Reproductive Rights lawyer who will represent Mississippi’s lone abortion clinic, the Jackson Women’s Health Organization.

The outcome is likely to hinge on the two newest justices, Donald Trump appointees Brett Kavanaugh and Amy Coney Barrett. Each has a record of support for abortion restrictions, though not necessarily for overturning Roe.

The court is separately deliberating over a Texas ban that applies at about six weeks. The Texas cases don’t directly address Roe and Casey, instead centering on the state’s effort to insulate the law from judicial scrutiny.

Although Fitch devoted most of her brief to calling for a sweeping ruling, she is also suggesting narrower options for the court. She says the 15-week ban would have just a small impact in Mississippi because the Jackson clinic doesn’t provide abortions after the 16th week of pregnancy.

“The act reduces by only one week the time in which abortions are available in Mississippi,’” the state argued.

Abortion-rights supporters say that rationale would provide no guiding principle to apply to other laws.

“Does the state really mean to suggest that if providers in another state offered care to 17 or 18 weeks, a 15-week ban would then be unconstitutional?” Rikelman argued.

A decision that upheld the law without overturning Roe would invite a stream of follow-up cases over bans that apply earlier in pregnancy. More than 20 states have laws banning at least some pre-viability abortions -- many of them currently being litigated in lower court.

Should the court explicitly overrule Roe, a dozen states -- including Mississippi -- have laws designed to automatically take effect and outlaw almost all abortions.