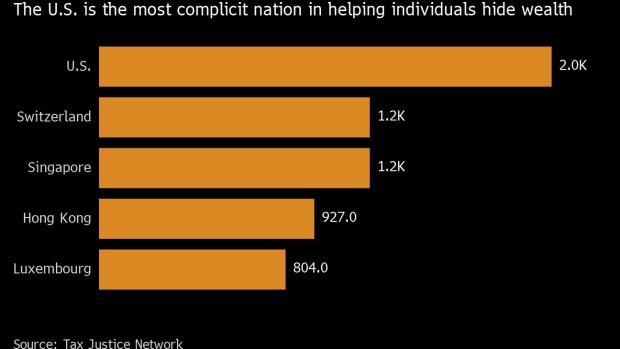 Pedestrians walk on a street after a winter storm in New York, U.S., on Thursday, Dec. 17, 2020. Winter Storm Gail pounded the city as temperatures dropped to 27 degrees with frigid sustained winds up to 35 mph, making dining outdoors unbearable amid the Covid-19 pandemic that has already crippled the restaurant industry. Photographer: Angus Mordant/Bloomberg , Bloomberg

(Bloomberg) -- For individuals looking to hide their wealth, there’s no country more helpful than the United States.

That’s according to research by the Tax Justice Network, which ranked countries by the extent their financial and legal systems help people and entities conceal ownership of assets. According to this measure, the US has increased its supply of financial secrecy to the world by almost a third since 2020, earning it the worst rating since rankings began in 2009.

The Tax Justice Network said the US’s worsening score was driven by its refusal to exchange information with other countries’ tax authorities. If the US changed its approach to the one used by other major economies, it would cut its supply of financial secrecy to the world by 40%, the report said.

President Joe Biden has made transparency reforms a key pillar of his foreign policy, vowing to tackle tax evasion and money laundering. In December, Treasury Secretary Janet Yellen said the US may be “the best place to hide and launder ill-gotten gains,” highlighting the urgency of anti-corruption efforts.

Five of the G7 countries – the US, UK, Japan, Germany and Italy – are responsible for cutting global progress against financial secrecy by more than half, according to the Tax Justice Network. Germany, which will host a G-7 meeting between finance ministers on May 18, has the seventh worse secrecy score globally due to poorly implementing new transparency laws, the report said.

“A small club of rich countries setting global rules on finance and tax are found to be the ones most responsible for facilitating financial secrecy and tax abuses,” said Moran Harari, lead researcher at the Tax Justice Network. “For decades, rich G-7 countries courted billionaires, oligarchs and corporate giants with secrecy loopholes and eyes-wide-shut-regulations.”

The report is even more damning for the UK if overseas territories and crown dependencies -- like the British Virgin Islands and Jersey -- are taken into account collectively. Together those jurisdictions are responsible for 8.9% of all financial secrecy in the world, according to the Tax Justice Network. That rises to more than a tenth of the world’s total supply if the UK is included -- a total almost double that of the US.

An estimated $10 trillion of wealth is held offshore, according to the network. That’s more than 2.5 times the value of all dollar and euro bills currently circulating the world.

Switzerland, which lies in second place on the ranking, supplies only half as much financial secrecy as the United States, the index shows. Cayman Islands, which had previously held top spot on the index, dropped to 14th after disclosing data which showed the scale of financial services it provides to non-residents was lower than expected.

The Financial Secrecy Index grades each country’s financial and legal system with a secrecy score out of 100 where a score of 0 is full transparency and a score of 100 is full secrecy. The secrecy score is then combined with the volume of financial services the country provides to non-residents to determine how much financial secrecy is supplied to the world by the country.