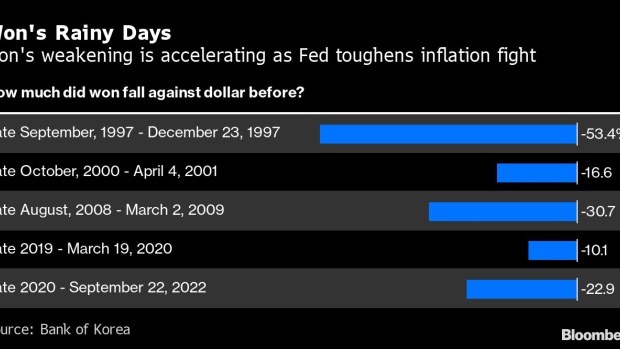 Customers dine at a food stall in Busan, South Korea, on Thursday, Sept. 22, 2022. Bank of Korea Governor Rhee Chang-yong widened the door for an outsized interest-rate hike after another jumbo move by the Federal Reserve pushed the won below a key psychological level. Photographer: SeongJoon Cho/Bloomberg , Bloomberg

(Bloomberg) -- A persistent depreciation of the won against the dollar risks exacerbating inflationary pressures in South Korea, the nation’s central bank said, pledging to take action to boost stability if needed.

The won breached the key psychological level of 1,400 per dollar last week after the Federal Reserve executed another outsized interest-rate increase. The weakening adds to concerns for the Bank of Korea, which has been tightening policy for more than a year to try to rein in inflation.

There is a “possibility that the continuation of the high exchange rate can serve as additional upward pressure on inflation,” the BOK said Monday in a report to parliament.

“The BOK will ratchet up its market monitoring and plans to take market-stabilization measures at the right timing if market instability widens due to herd phenomenon,” it said.

Governor Rhee Chang-yong told reporters last week that the Fed’s moves had altered the picture the BOK had in mind for future moves. A growing number of economists see the BOK hiking rates by a half-percentage-point when the board meets on Oct. 12.

The BOK raised its rate by a half point for the first time ever in July. While Rhee made clear in the wake of that decision that he preferred a gradual pace of tightening, he has also kept the door open for another outsized hike.

The central bank stressed that Korea’s economy remains fundamentally sound, saying the weakening of the won was primarily due to external factors. It blamed Fed policy tightening, the Russian war on Ukraine and a weakening of the Japanese and Chinese currencies for the depreciation.

The central bank also pointed to rising overseas investment by Korean businesses and the national pension fund among other reasons, saying this amounted to more than $81 billion from January-to-July this year.

The won’s depreciation coincides with growing trade deficits as oil prices remain elevated and concerns mount over a global recession. Korean exports, a barometer of worldwide demand, are barely rising, while sales of memory chips, the nation’s biggest source of income, are slackening globally.