The S&P 500 gained, recovering half its losses now from a selloff that started in January. Meanwhile, bond yields continued their ascent as short-dated Treasuries hurtled toward their worst quarterly performance in almost four decades.

The gains come as traders are braced for high volatility until there’s more certainty about Fed policy, inflation and the war in Ukraine. Yet the S&P 500’s reversal from a recent downtrend could be an indicator U.S. stocks have reached a bottom, said Craig Johnson, Piper Sandler & Co. chief market technician.

“The collective technical evidence suggests the correction lows have likely been set,” he wrote in a note. “Momentum indicators remain bullish after forming positive divergences from price action over the last several weeks.” 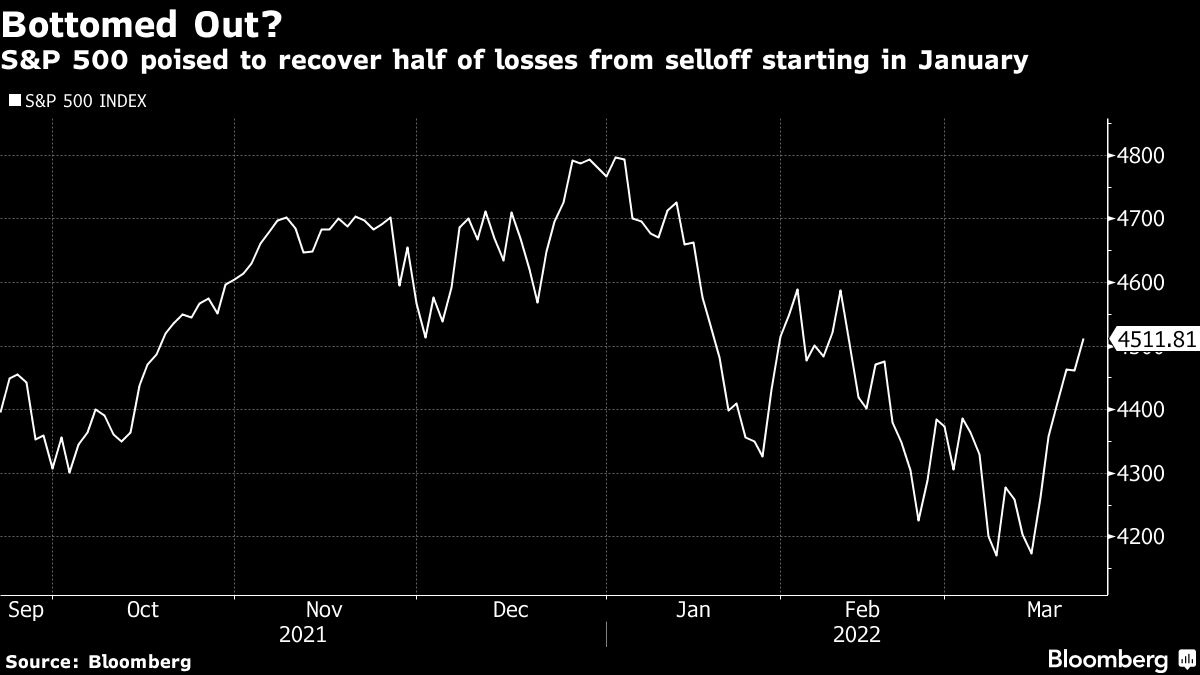 Still, commodity-market disruptions stemming from the war have increased pressure on key central banks to tighten monetary policy. Oil in New York fell after a volatile session for Brent crude futures as Germany and Hungary put the brakes on a potential embargo on Russian oil.

The Fed hiked rates by a quarter-point last week and signaled six more such moves this year, with Powell indicating the bank is prepared to raise rates by 50 basis points at its next policy meeting if needed.

Derivative traders are now pricing in about 7.5 quarter-point rate hikes at the remaining meetings this year, effectively making provision for more than one half-point rise.

“I think that investors were heartened by what Fed Chair Powell said yesterday -- that they’re really not going to remain behind the curve,” Sam Stovall, chief investment strategist at CFRA, said on Bloomberg’s “QuickTake Stock” stream. “What you’re seeing with the selloff in bonds is that investors are looking to go elsewhere. They certainly don’t want to be in an asset classes like a seesaw -- if the yield goes up, their price will be going down. So they’re gravitating toward that area that most likely has better upside potential, and that’s equities right now.”

European stocks marched higher, led by banks and cyclical stocks like automakers. The dollar pared back an earlier advance against peers. And Bitcoin gained about 3 per cent to trade at its highest level in almost three weeks.

Here are some key events this week: