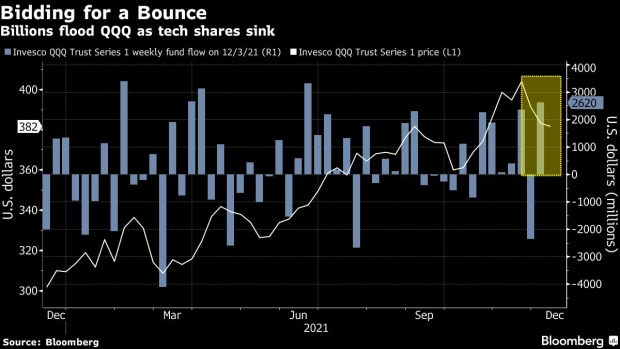 (Bloomberg) -- Beleaguered dip buyers piled into tech-focused ETFs last week, undeterred by a rout in risk assets that wiped $370 billion from the Nasdaq 100.

More than $2.6 billion flooded into the Invesco QQQ Trust Series 1 exchange-traded fund (ticker QQQ) last week, according to data compiled by Bloomberg. While that was the biggest influx since June, the ETF slumped more than 2%. Meanwhile, the ProShares UltraPro QQQ fund (TQQQ) -- a triple-leveraged bet on tech shares -- absorbed nearly $650 million. Even so, the fund tumbled 6.7% in the span.

The inflows continue a pattern of buying any dip in technology shares, a strategy that’s worked throughout the pandemic era, but has now come under threat from a newly hawkish Federal Reserve. The Nasdaq 100, the index that the QQQ ETF tracks, has plunged more than 5% in two weeks. Still, its consistent outperformance for 18 months has investors eyeing a rebound.

“Investors view tech as a ‘heads-I-win-tails-you-lose trade’. If the economy is doing well, these companies will continue to disrupt everything else and take market share. On the other hand, last year’s pandemic performance has emboldened investors that believe that these stocks are also defensive, because when the economy slows, those will be the companies with growth,” said Dan Suzuki, deputy chief investment officer at Richard Bernstein Advisors. “So in almost any dip scenario, there’s a view that these stocks should be bought.”

The start of trading in New York on Monday showed the struggles facing that strategy, with tech stocks lagging the broader market. While the S&P 500 climbed 1% from the opening bell, the Nasdaq 100 was little changed.

The inflows stand at odds with the current Wall Street consensus. After the selloff, banks including Morgan Stanley have warned that there’s more pain to come for the expensive tech sector, among the most sensitive to a rise in interest rates and borrowing costs.

While mounting evidence shows a reluctance from retail traders to buy this dip, products like QQQ tend to see high usage by institutions and bigger investors because of their size and liquidity. With over $200 billion in assets, QQQ ranks as the world’s fifth-largest ETF.

“We’d expect stocks could move to regain some of the ground lost last week as fundamental investors seek out ‘babies that might have been thrown out with the bath water,’ and the ‘buy the dip’ crowd rummage the landscape for ‘high fliers’ that might have had their ‘wings clipped’ more than they deserved,” John Stoltzfus, chief investment strategist at Oppenheimer, wrote to clients.

But that tried-and-true strategy -- which has propelled the Nasdaq 100 over 20% so far in 2021 -- may put investors at risk of missing better-priced opportunities in international stocks and small caps, RBA’s Suzuki said.

“This ever-growing confidence in tech stocks is a reflection of the current bubble environment,” Suzuki noted. “Investors have tunnel vision with respect to innovation, tech and disruption, which is flat out ignoring cheaper opportunities in the rest of the market.”