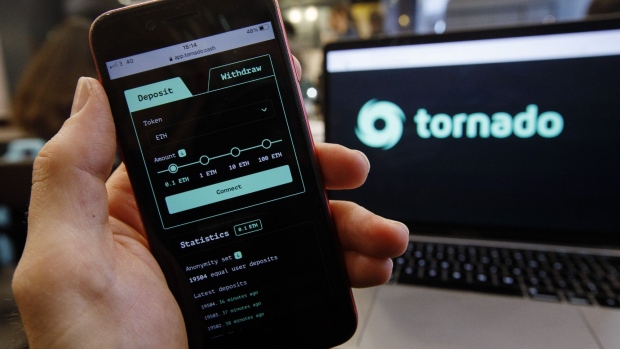 The Tornado Cash website displayed on a laptop and smartphone screen arranged in London, U.K., on Tuesday, March 15, 2022. Crypto protocols that allow digital-asset traders to obfuscate their transaction activity should be more regulated, the U.K.’s National Crime Agency said. , Bloomberg

(Bloomberg) -- TORN, the token of Tornado Cash, plummeted as much as 24% after a developer for the crypto transaction mixing protocol was arrested in Amsterdam on Friday.

The drop extended the slide begun earlier this week after the US Treasury Department banned US citizens from using the Ethereum-based protocol. The site is one of the most common platforms for those who want to obfuscate crypto transactions. It has been used by a North Korean hacking group linked to the $625 million attack on the blockchain gaming project Axie Infinity in March as well as facilitating a variety of cyber crimes, the Treasury Department said.

TORN is relatively small, with market value of about $135 million, according to data from CoinMarketCap. Bitcoin, by comparison, has a market value of around $455 billion. TORN was down about 16% to $14.23 as of 3:03 p.m. in New York.

One of the protocol’s developers was arrested by the Fiscal Information and Investigation Service in Amsterdam on Friday. The authority said it hasn’t ruled out multiple arrests in the case.

The so-called governance token also enables its holders to vote for changes in the protocol. Large holders include founding developers and its early supporters.