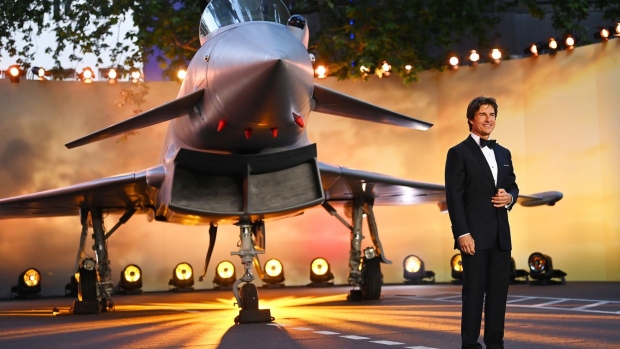 (Bloomberg) -- “Top Gun: Maverick” passed $1 billion in global ticket sales, according to Paramount Pictures, becoming the highest-grossing film ever for actor Tom Cruise and marking the best year for the studio since 2014.

The film has grossed more than $520 million in North America and more than $486 million internationally, Paramount said Monday in an email. It’s the biggest movie for the studio, part of Paramount Global, since “Transformers: Age of Extinction” in 2014.

The picture, co-produced and co-financed with Skydance Media, was the only major release to exceed expectations last weekend, according to Bloomberg Intelligence, which predicts consumer spending may slow amid soaring inflation. That’s despite a packed and diverse slate of upcoming theatrical releases.

Through the weekend, North American ticket sales for all movies have more than tripled to $3.6 billion in 2022 from a year earlier. Revenue remains about a third below 2019 levels, according to Bloomberg Intelligence.