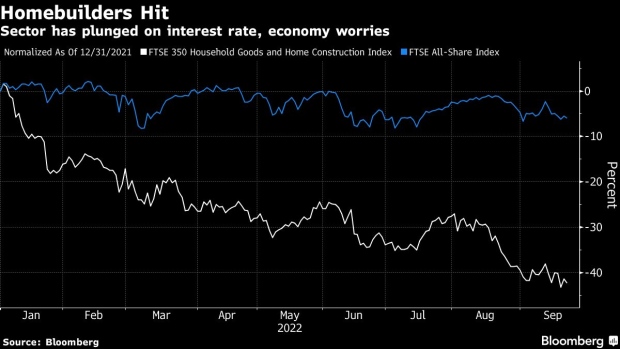 Customers sit at a pub's terrace along The Royal Mile during the Edinburgh International Festival and the Edinburgh Festival Fringe, in Edinburgh, UK, on Tuesday, Aug. 16, 2022. Britain's long spell of hot weather boosted sales in shops and spending on “staycations” as consumers hit by a surge in the cost of living opted to cut back on overseas travel, two separate reports showed. Photographer: Robert Ormerod/Bloomberg , Bloomberg

However, most of the gains quickly petered out amid a decline for broader markets. The UK FTSE 250 index -- which is dependent on Britain’s economy -- slid 1.9% by midday in London to hit the lowest level since November 2020.

The losses came as UK bond yields soared on worries about rising government debt and further Bank of England rate hikes in reaction to the budget.

“The Truss administration wants to put a rocket under growth, but there is a risk that after a first boost, the policies could crash and burn, particularly if government borrowing costs soar further,” said Susannah Streeter, an analyst at Hargreaves Lansdown.

These were the sectors in focus:

Kwarteng had already rolled back the rise in National Insurance, an employment tax, brought in by previous chancellor Rishi Sunak. The UK Treasury said Thursday that the 1.25 percentage point hike will be scrapped from Nov. 6. “Taxing our way to prosperity has never worked,” Kwarteng said in a statement.

That decision, alongside the recent household energy price cap, may prevent a further decline in consumer confidence, according to Shore Capital analyst Clive Black. Nevertheless, “aggregate demand can still be expected to be much lower for the majority of households as the important fourth quarter arrives,” Black wrote in a note on consumer stocks.

Marks & Spencer Group Plc was among retailers gaining Friday on news that a planned increases in the duty on alcohol will be canceled. Broader tax cuts for corporations and individuals were also announced, as well as VAT-free shopping for overseas visitors.

During her leadership campaign, Truss was reported to be considering cutting business rates -- a form of property tax on commercial premises. The levy has long been bemoaned by both retailers and leisure operators like pubs and restaurants. JD Wetherspoon Plc and Wagamama-owner Restaurant Group Plc were among the stocks to watch.

Housebuilders Persimmon Plc and Taylor Wimpey Plc jumped as much as 4% Friday as Kwarteng outlined changes to the thresholds for stamp duty -- a property transaction tax -- that’s expected to boost property demand.

Cuts targeted at first-time buyers would benefit all housebuilders, but more so Persimmon and Vistry Group Plc, while reductions in the tax at the higher end of the market would benefit Berkeley Group Holdings Plc and Redrow Plc, according to Jefferies analysts Glynis Johnson and Priyal Woolf. Additionally, the scrapping of the cap on bankers’ bonuses -- or anything else that boosts London as place of employment -- could benefit Berkeley, too, they said in a note. An index tracking UK homebuilder shares is down 43% this year.

The potential for further windfall taxes was a concern for many UK energy investors. Labour leader Keir Starmer has called for a fresh levy, though Truss has ruled it out, providing support for shares in companies like British Gas-owner Centrica Plc. Drax Group Plc, meanwhile, slumped last month after Kwarteng said the company’s burning of US-imported wood pellets for energy “isn’t sustainable.”

Ditching the bonus cap grabbed headlines, but investors are instead focused on rising UK interest rates, with the Bank of England on Thursday hiking again -- a move that’s set to further expand profit margins for lenders.

Lenders were hit earlier this week as Bloomberg reported that the government is considering scrapping interest payouts on some deposits held at the BOE. Analysts questioned the feasibility of such a plan, including Citigroup’s Andrew Coombs, who said in a note that it could “undermine operational independence.”