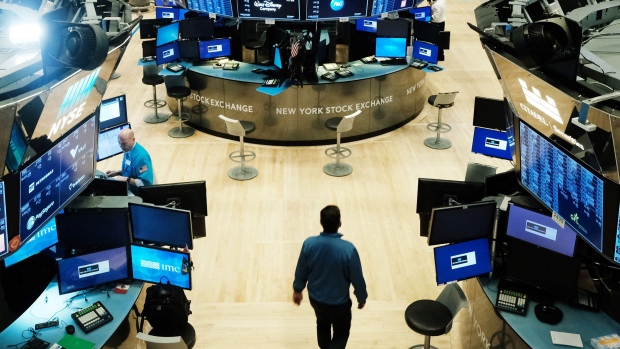 Forget a Bitcoin ETF, for many Wall Street stock traders the most eagerly awaited exchange-traded funds are just as speculative -- and even more controversial.

Known as short-volatility products, a fresh twist in a legal battle is bringing these strategies riding calm markets back into the limelight at a time when at least three issuers are trying to launch new funds.

A New York appeals court ruled late last month that Credit Suisse Group AG must face allegations it engineered the implosion of its VelocityShares Daily Inverse VIX Short Term notes (ticker XIV), the central event in an episode of 2018 turmoil that came to be known as “Volmaggedon.”

Back then, a stock rout triggered a sudden spike in volatility that in turn caused Credit Suisse to recall the product, which was essentially a bet on falling swings in equity prices. With almost US$1.9 billion of assets, its collapse was believed to have compounded the selloff.

Now, the Credit Suisse ruling threatens to reignite the concerns that have dogged these dangerous but popular instruments for years. 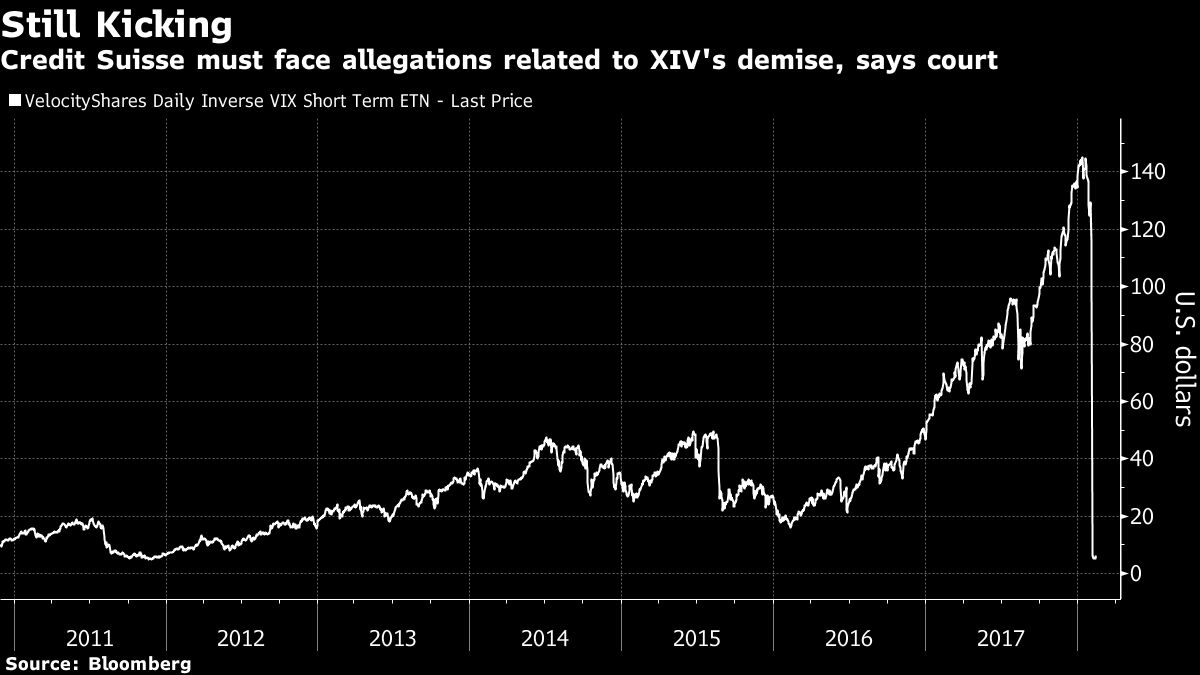 “The SEC’s biggest concern is probably avoiding a repeat of the February 5, 2018-style VIX futures spike and liquidity crash,” said Vance Harwood of consultancy Six Figure Investing. That incident was “probably due to the rebalancing needs of the leveraged ETPs,” he said.

The U.S. Securities and Exchange Commission in March approved Volatility Shares LLC’s -1x Short VIX Futures ETF before promptly releasing a letter effectively putting the action on hold so that it could be reviewed.

Dynamic Shares Trust also appears to have approval for its Dynamic Short Short-Term Volatility Futures ETF, but the product still has additional hurdles to clear with the SEC.

Simplify Asset Management, another short-volatility product hopeful, has yet to progress beyond filing a registration statement.

At issue in the Credit Suisse legal dispute is whether the bank intended to cause a collapse in XIV’s value through trades in futures contracts for the Cboe Volatility Index, or VIX.

The note was designed to gain when futures fell, and lose value when they rose. Put simply, it generated profits as long as stocks remained calm but was liable to crash if volatility hit.

In the course of managing the note, Credit Suisse routinely bought VIX futures in the open market, according to court documents. As the note got bigger, the bank had to buy an ever-larger amount, which had the knock-on effect of pushing up their price.

Ultimately the price of these futures soared, and so the value of XIV slumped. The plaintiffs in the case, a group of investors led by Set Capital LLC, allege the bank enacted “a scheme to sell millions of XIV Notes before engineering a near-total collapse in their price,” according to the court documents.

Credit Suisse contends in its filings that its trades were done for legitimate hedging purposes.

“We are pleased that the court has affirmed the dismissal of a significant portion of the case, and we remain confident that plaintiffs’ remaining claims are inconsistent with the facts, without merit, and will be dismissed in due course,” said a spokesperson for the bank.

Regardless of how the case is resolved, the proposed new short-volatility products have taken measures to reduce the chances of the kind of meltdown endured by XIV. The Dynamic Shares fund is actively managed, which its issuer says will “provide better risk management than passively managed short VIX” products, according to a filing.

The sponsors of the Volatility Shares ETF plan to limit the fund’s ability to trade VIX futures during a 15-minute period at the end of the day to 10 per cent of the outstanding contracts. The product will also calculate its closing value by using a 15 minute time-weighted average price ending at 4 p.m. in New York, versus using the settlement prices of the futures, which are typically determined in the two minutes before 4 p.m.

“Previous funds have just used the settlement price of the future, which has always been tricky because they have to hit as close as they can to that settlement,” said Volatility Shares co-founder Stuart Barton.

The product from Simplify also attempts to improve on XIV by mitigating the eye-watering losses a noteholder can suffer when stock volatility spikes. It’ll do so by holding options on VIX futures and the S&P 500 Index that are designed to gain in a market crash.

With the VIX still well below 20 and stocks setting records, demand for new vehicles could be high. Only a handful of short-volatility exchange-traded products exist in the U.S., notably the US$544 million ProShares Short VIX Short-Term Futures ETF (SVXY). Traders have also opted to short long products.

“Despite their dangers to investors and outlaw notoriety, they were pretty beloved trading products for a certain group of people,” said Eric Balchunas, Bloomberg Intelligence senior ETF analyst.