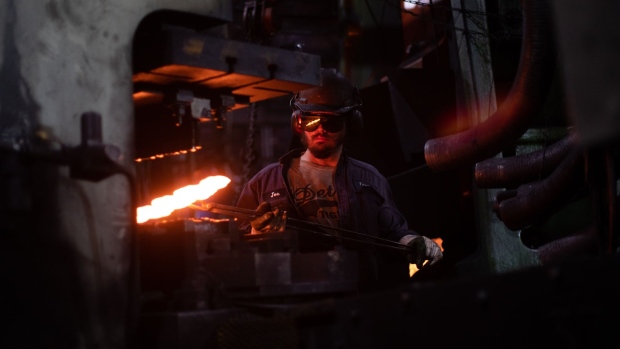 (Bloomberg) -- An acrid smell hangs in the air at Trenton Forging Co. on the outskirts of Detroit as a 4,500 pound hammer slams a bar of red hot steel with enough force to shake the building.

A worker uses tongs to position the piece, heated to 2,200 degrees, under the hammer, then onto a conveyor belt. The process is repeated 7,000 times a day at the 90-employee plant, resulting in fuel rails that feed gasoline to injectors.

But the days of forging fuel rails is numbered. They’re among hundreds of parts in internal combustion engines that won’t be needed when the country transitions to electric vehicles, a fact that isn’t lost on Dane Moxlow, the vice president of Trenton Forging, whose grandfather started the business in 1967.

“This might go away completely,” Moxlow, 33, said as a pair of workers behind him inspected a freshly made rail. “Is it something we worry about? Yeah. But it’s also something we plan for.”

Across the country, thousands of companies such as Trenton Forging are warily eyeing a future of electric vehicles that contain a fraction of the parts of their gasoline-powered counterparts and require less servicing and no fossil fuels or corn-based ethanol. It’s a transition that will be felt well beyond Detroit, as millions of workers at repair shops, gas stations, oil fields and farms find their jobs affected by an economic dislocation of historic proportions.

“Anybody who thinks this transition is going to go smoothly is fooling themselves,” said Michael Robinet, executive director of automotive advisory services for consulting firm IHS Markit.

Making, selling and servicing vehicles employ an estimated 4.7 million people in the U.S., according to the Bureau of Labor Statistics. Some of the jobs won’t go away, of course — there will still be a need for dealerships and tire shops.

Making the massive batteries that line the bottom of electric cars promises to employ thousands. But where a conventional car’s engine and transmission have hundreds of parts, some electric-vehicle powertrains have as few as 17, according to the Congressional Research Service. That doesn’t take into account the radiators, fuel tanks or exhaust systems that electric vehicles don’t need. Once operating, an electric car has no spark plugs or oil that need changing or mufflers that wear out. And with so few moving parts, service stations could be relegated to changing tires and windshield wipers.

Conventional cars will probably remain on the road for years, softening the blow for repair shops and other affiliated industries. But with an average lifespan of 12 years, the trend lines for gasoline-powered vehicles will be heading down.

The shift will reduce demand for oil nearly by 4.7 million barrels a day by 2040 in the U.S. alone, according to projections by BloombergNEF. That’s about 26% of U.S. consumption, roughly equivalent to the amount that Germany and Brazil combined consumed daily in 2020. Less gasoline being sold also means the need for ethanol, which is blended into motor fuels and consumes a third of the U.S. corn crop, will also fall.

“It’s a disruption that people cannot appreciate,” said Paul Eichenberg, managing director of Paul Eichenberg Strategic Consulting. “Truly the engine and transmission becomes the buggy whip of the 21st century. But if you look at the other industries, it will have a huge impact.”

That future is fast approaching. General Motors Co. has vowed to sell only zero-emissions models by 2035. Ford Motor Co. said it expects 40% of its global vehicle sales volume to be electric by 2030 and Stellantis NV, the successor to Fiat Chrysler, has said it is targeting over 70% of sales in Europe and over 40% in the U.S. to be “low emission vehicles,” meaning either electric or hybrid, by 2030.

The Biden administration is enthusiastically encouraging the transition, which it sees as a key to combating climate change. It is proposing an array of incentives and has ordered the federal government to electrify its fleet. Transportation is responsible for about a third of the greenhouse-gas emissions in the U.S., making it the largest single sector, according to the Environmental Protection Agency.

“The future of the American auto industry is electric,” President Joe Biden said in front of a bank of electric vehicles on the White House lawn in August. He then signed an executive order setting a goal of having half of all vehicles sold in the U.S. be emission-free by the end of the decade. China, he said, is winning the race to make electric vehicles and the U.S. must catch up.

In many ways, the U.S., where only 2% of vehicles sold are electric, is a laggard. France plans to ban internal combustion engines in 2030, and China and Britain will do so by 2040. India says it is setting an “aspirational target” of all-electric sales by 2030.

The United Auto Workers union, seeing the handwriting on the wall, is gearing up for a fight over who gets to make the batteries that power the vehicles, said Bernie Ricke, the silver-haired president of Local 600, which represents workers at the Ford plant where the F-150 pickup truck is made.

“You can like it or not like it — it’s coming,” said Ricke, during an interview from his office in the shadow of Ford’s massive 1,100-acre plant, where a conventionally powered pickup truck rolls off the assembly line every 53 seconds.

Nearby, a nondescript white warehouse with blue bay doors is being outfitted to make the Lightning, as the electric F-150 will be known.

At the event on the White House lawn in August, Ricke introduced Biden and stressed the need to protect union jobs.

The UAW, which has estimated the shift to electric could result in the loss of 35,000 union jobs, says it is taking a realistic approach and is pushing for protections for workers. That includes commitments that jobs be located in the U.S. at comparable wages and benefits.

“We’re not running from and fighting technology that everyone sees is coming,” said Jeff Dokho, director of research at the union’s headquarters. “We’re saying if you’re going to take taxpayer money, you need to have the gold-standard jobs like building powertrains. We’re pushing for ‘If you’re going to take government money, the other side is there need to be good jobs in those communities.’ Our focus has been to try to attach labor provisions wherever we can.”

“Just like in China and Europe, for all this to work, there needs to be a big public investment,” Dokho said. “We feel like in the current environment, we should have strings attached.”

From his City Hall office across the street from from GM’s Global Technical Center, Mayor Jim Fouts of Warren, Michigan, ticked off a list of benefits and investments that electric vehicles had brought. Chrysler is planning to re-open a plant in town to produce an electric version of the Jeep Wagoneer and with it 6,000 jobs, Fouts said.

“Most of the development going on in Warren is related to electric vehicles and batteries,” said Fouts, a bespectacled 78 year-old, whose age is belied by a twice-a-day running habit. “There is a greater realization by more and more people that the time is now to go into something that will not harm the environment which is what fossil fuels are doing.”

Still, Fouts said, some of Warren’s 134,000 residents were worried about the future.

“There is a lot of reticence about whether automation and electric vehicles will replace their jobs,” Fouts said. “I think with training they will be OK.”

“Electric vehicles are great,” said Turke, wearing safety goggles and carrying a thermos as he prepared to start his shift at the company’s 3.31 million square-foot Warren Truck Assembly Plant. “Somebody’s still got to build them.”

But the jobs created won’t necessarily resemble the ones lost, said Eichenberg, the consultant, who is a former executive for auto part supplier Magna International Inc. Parts such as transistors and capacitors and high-voltage battery packs are manufactured in much different ways — meaning a worker on an engine manufacturing line can’t simply switch to making batteries.

“It’s like comparing apples and oranges,” Eichenberg said. “They are chemical companies, they are materials companies and, as you have this change, there is just a fundamental difference.”

The Motor & Equipment Manufacturers Association, which represents parts suppliers such as Valeo North America and Robert Bosch LLC, estimates that the U.S. auto parts industry could lose as much as 30% of its workforce or nearly 300,000 jobs when the transition is complete.

“Suppliers, the UAW, lots of folks are right to be concerned,” said Ann Wilson, a senior vice president at the association. “The reality is the transition is going to occur whether they are concerned or not.”

The coming change could be likened to the electrification of America in the early part of the 20th century, when the nation began switching from the steam power to electricity, said Theodore DeWitt, University of Massachusetts Boston professor of management.

That change required factories that no longer needed giant steam engines in the middle of their plants to retool, but it also created new jobs, including ones that didn’t exist before, such as electrician. For a time, that became largest occupation in the country, DeWitt said.

“I don’t think there is a case for industrial transformation where we haven’t lost jobs and created others,” DeWitt said. “There will be jobs that didn’t exist before.”

The transition is already creating opportunities. GM and South Korean-based battery maker LG Energy Solution announced in April they would build a $2.3 billion battery plant in Tennessee to supply the automaker’s electric vehicle. Bill Lee, the state’s Republican governor, said it was the “largest single investment of economic activity in the state’s history.”

The plant will employ 1,300 people when it begins production, and it represents the second joint venture for the two companies. GM and LG Energy already are constructing their first vehicle-battery plant in Lordstown, Ohio. That plant will employ more than 1,000 workers and supply batteries to Factory Zero, an electric-truck factory near Detroit. Stellantis and Korean battery-maker Samsung SDI on Thursday announced plans to build a factory in the U.S., adding to the automaker’s battery projects in North America.

“This is net job creator for whoever captures the race for global clean transportation,” said Joe Britton, executive director of the Zero Emission Transportation Association, which represents electric vehicle makers such as Tesla Inc. and Lordstown Motors Corp. “We have a huge opportunity to invest wisely and that’s what our foreign competitors are doing.”

Yet the transition will result in winners and losers. Metal forging is in the latter category. Fully a quarter of the a $90 billion the industry generates each year comes from vehicle parts such as rods, crankshafts, gears and drive shafts.

For Joseph Schwegman, president of Quality Steel Products in Milford, Michigan, that means finding new products to replace the torque converter hubs, a disc-like transmission component, they now make. They won’t be needed in an electric vehicle.

The 40-person forging company is considering making hand tools like pliers and is also examining whether existing parts they make, like D-rings, can be used to hold vehicle batteries.

“We are going to be a lot more aggressive in looking at other opportunities,” Schwegman said, as sparks from a metal grinder showered the factory floor behind him. “We want to continue to diversify.”