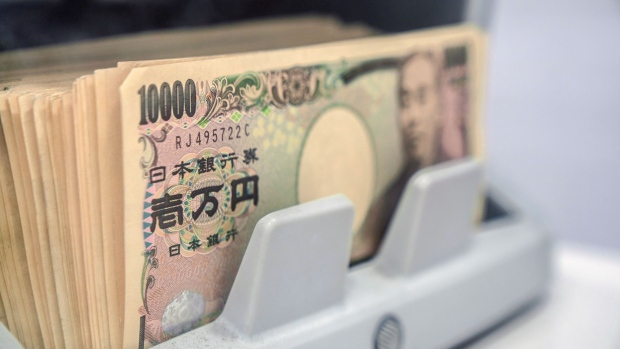 A surge in rates in Japan, home to millions of savers who invest in bonds around the world, would reverberate quickly across financial markets. Photographer: Soichiro Koriyama/Bloomberg , Bloomberg

(Bloomberg) -- In Tokyo’s financial circles, the trade is known as the widow-maker. And while it has done nothing but saddle young, cocksure investors from London to New York with crippling losses over the past two decades — ergo the name — they’re lining up once again to take a shot.

The bet is simple: that the Bank of Japan, under growing pressure to stabilize the yen as it sinks to a 24-year low, will have to abandon its 0.25% cap on benchmark bond yields and let them soar, just as they already have in the US, Canada, Europe and across much of the developing world.

The stakes are high. A surge in rates in Japan, home to millions of savers who invest in bonds around the world, would reverberate quickly across financial markets. Yields nearly everywhere would dart higher still, analysts say, pushing up borrowing costs for companies, consumers and governments, and heaping stress on a global economy that’s already begun to sputter under the weight of soaring energy prices and snarled supply chains.

What’s more, on a broader level, a loosening of the BOJ yield cap would signal something much bigger — an end to the global era of ultra-low interest rates. Japan was the first to usher in this period back in the 1990s, years before any other country. And today, it’s the lone holdout clinging desperately to a policy that its central bank chief, Haruhiko Kuroda, says is needed to bolster an economy that’s been mired in a funk for decades.

Japan is “looking increasingly out of line with the global environment,” said Arjun Vij, a portfolio manager at JPMorgan Asset Management in Hong Kong. “The BOJ will have to adjust the current policy framework at some point,” he added, as the tumbling yen and rising import costs squeeze businesses and consumers.

“Japan is the one market that’s telling us to go short,” said Kellie Wood, a fixed-income money manager at Schroders, which oversees about $1 trillion.

As the wagers pile up, they’re starting to put strain on the more than 1 quadrillion yen ($7.4 trillion) Japanese bond market.

Futures were brought to the brink of a trading halt on June 15 as 10-year securities slumped the most since 2013, while 10-year yen interest-rate swaps — popular with international funds — have blown past the central bank’s 0.25% “line in the sand,” one of the clearest signs yet that traders are convinced that Japanese authorities will be forced to capitulate.

In the cash market, overseas investors sold 4.8 trillion yen of Japanese bonds in the week through June 17, the biggest weekly outflow in data going back to 2001.

There’s a second camp that’s betting against Japan through the currency market. They borrow the yen and sell it, hoping to drive it down in the process, and then buy bonds overseas to pocket the yield differential. Because a BOJ policy shift would likely cause the yen to surge in the immediate aftermath, they also short JGBs to hedge their near-term risk.

This is, according to Edouard de Langlade, founder of macro hedge fund EDL Capital, “the real trade” in Japan.

In spite of all the market pressures, Kuroda has held firm, insisting at the central bank’s most recent gathering that it’s too early to cut back on monetary easing with Japan’s economy still sputtering.

Inflation, while breaking above the central bank’s 2% target for the first time since 2015 in April, remains far from entrenched amid tepid wage growth, he’s said, as the BOJ looks to move past its years-long effort to ward off deflation.

He’s also tried to brush aside suggestions that the central bank’s yield cap is under threat, boosting bond purchases to historic levels to defend it.

“We can maintain our yield-curve control even if yields rise abroad” by buying as many bonds as needed, Kuroda said earlier this month. The central bank has already accumulated around half of the government’s long-term debt.

In the process, the outgoing BOJ governor is setting the stage for further monetary-policy divergence with the Federal Reserve and other central banks around the world.

Betting against the BOJ has confounded some of the biggest names in global finance in recent decades.

“It’s called the ‘widow-maker’ trade for a reason, and I have no intention of joining the ranks of such traders,” said Crossbridge Capital Chief Investment Officer Manish Singh. “I wouldn’t bet against the Japan central bank printer,” he said, adding “they can print and print until shorts retreat.”

While market watchers say the BOJ would probably adjust its yield cap before doing away with it outright, the implications for global bond markets would nonetheless be profound.

Higher domestic yields would encourage Japanese households and institutions to sell their overseas assets and bring their investments back onshore. That could impact everything from US corporate yields to demand for emerging-market debt. Their holdings also include over $1 trillion of Treasuries, the largest stash of US government debt outside America.

Rising borrowing costs would weigh on growth just as central bankers around the world are seeking to walk a fine line between tamping down inflation and avoiding a recession.

In the near-term, the move could unleash a wave of volatility much like Australia’s decision to scrap its curve control efforts last year, or Switzerland’s move to abolish its currency cap without warning in 2015.

While the BOJ ditching its yield cap isn’t his base case, the knock-on effects of such a move would be felt the world over, according to Calvin Yeoh, a Singapore-based portfolio manager at Blue Edge Advisors Pte.

“The global linkages between rates almost guarantees a negative shock to rates markets outside of Japan,” Yeoh said.

For a QuickTake explainer on the yen’s plunge, click here

As the yen continues its descent — touching a 24-year low of 136 per dollar earlier this month — traders are increasingly speculating what level will force the BOJ into action.

Not withstanding Kuroda’s tough talk, there’s already been signs that policy makers are getting anxious.

The currency’s plunge is amplifying already soaring food and energy prices, and with national elections around the corner, Prime Minister Fumio Kishida has boosted fuel subsidies to limit the pain.

Likely aware that it needed to talk up the yen a little to give the government some help, the BOJ made a rare reference to foreign-exchange risks in its most recent policy decision. Kuroda has also toned down his insistence that the weakening yen is generally a positive for the Japanese economy given the boost to it gives to exporter earnings.

Famed economist Nouriel Roubini said last week that a tumble past 140 per dollar, a level less than 4% away, would likely be enough to trigger a policy shift.

Schroders’s Wood, meanwhile, is waiting and watching, ready to ratchet up her bets.

“If there was any indication that they would be moving away from yield-curve control, we would certainly be adding to the shorts,” she said.