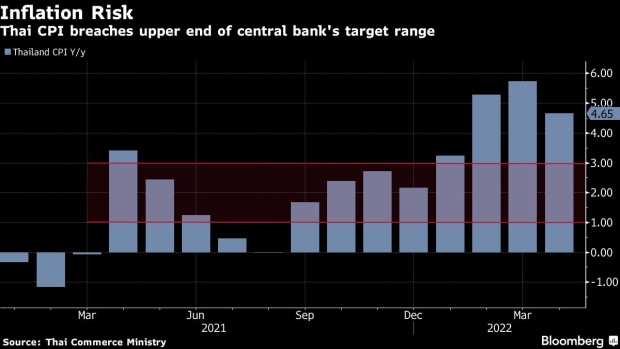 The country’s gross domestic product in the three months ended March advanced 2.2% from a year ago, the National Economic and Social Development Council said Tuesday. That’s faster than the 1.7% median estimate in a Bloomberg survey, and compares with a 1.8% expansion the previous quarter.

The healthier pace of growth offers the central bank some space to target inflation with higher interest rates, which can be a drag on an economy. Consumer prices have accelerated faster than the Bank of Thailand’s 1%-3% target range since the beginning of this year, with the war in Ukraine worsening the outlook.

Central banks in Asia from India to Malaysia have begun moving away from their easy money policies as they prioritize fighting inflation over bolstering economic growth.

GDP in the first quarter rose 1.1% from the previous three months, the NESDC said, compared with growth of 0.9% expected in the survey.