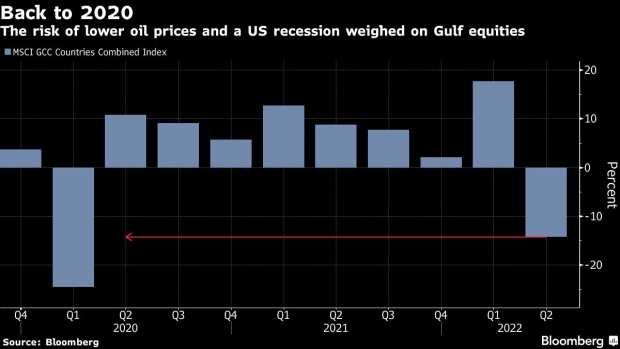 (Bloomberg) -- Sign up for our Middle East newsletter and follow us @middleeast for news on the region.

The selloff in Persian Gulf equities won’t come to an end just yet, according to strategists, who say the risk of lower oil prices and a probable US recession will keep gains at bay.

“There could be more pain for Gulf markets from current levels,” said Noaman Khalid, associate director of indices, macroeconomics and strategy at Arqaam Capital. A lack of positive catalysts would leave the region’s equities “exposed to global vulnerabilities,” he said in written comments.

The MSCI GCC Countries Combined Index has slumped 13% this quarter, marking its worst three-month performance since March 2020, and regional benchmarks including those in Saudi Arabia and the United Arab Emirates have given up most of their yearly gains. The gauge is set to snap a sequence of handing investors positive returns every quarter since the start of the pandemic.

Gulf countries were seen as a haven by investors over the past year as oil prices soared and interest rates climbed, benefiting benchmarks which generally have big weightings of banking and energy shares. Regional equities gave up most of their yearly gains in recent weeks as sentiment soured due to the prospect of a US recession and as crude prices started to pull back from recent peaks.

Saudi stocks, which earlier this year saw the highest foreign inflows since 2019 and became one of the world’s top five markets by value, are set for their worst quarter since March 2020 and have seen net foreign outflows for the past three weeks. Saudi Aramco, the heaviest weight on the benchmark Tadawul All Share Index, surpassed Apple Inc. as the world’s most valuable company once more this year. The oil giant’s market capitalization has increased 19% this year to about $2.3 trillion.

Simon Kitchen, head of strategy at EFG-Hermes, also feels that Middle Eastern equities have more room to fall in the second half. “Valuations are still well above historical averages, and we haven’t seen many cuts in earnings expectations yet,” he said in written comments.

The MSCI GCC Countries Combined Index trades at 15.2 times forward earnings, higher than the average of 13.5 for the past decade.

According to Stéphane Monier, chief investment officer at Banque Lombard Odier & Cie SA, the premium Gulf equities have to emerging markets “is justified at least for the next two or three years.” Regional stocks are likely to continue to perform well in the case of a mild US recession, though would be weighed down in the case of a bleaker economic scenario, he said in an interview.