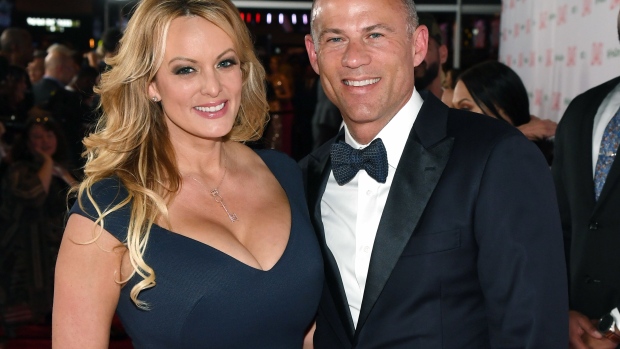 Stormy Daniels and Michael Avenatti in 2019. , Getty Images via Bloomberg

(Bloomberg) -- Adult-film actress Stormy Daniels was ordered to submit her mental health records to the judge overseeing the criminal case against her former lawyer Michael Avenatti, who goes on trial next month on charges that he stole her book advance.

U.S. District Judge Jesse Furman in Manhattan on Monday granted Avenatti’s request to make Daniels hand over the documents for the judge to review in private, if they exist. Furman will decide which records, if any, Avenatti can use in his defense at the trial set to start Jan. 24.

“The court finds that defendant has a good-faith basis to request the materials at issue,” Furman said.

In a Facebook post, Daniels blasted Avenatti for seeking records that she says do not exist, and for doing so on the grounds that her testimony cannot be trusted because of her work “in the paranormal field.”

“I have never received any psychiatric care, counseling or medication of any form EVER....BUT what if I had? What does my mental health have to do with his crimes?” she wrote.

Daniels, who gained fame after suing Donald Trump over a hush money payment, fell out with Avenatti around the time the lawyer was charged in two separate criminal cases. A jury in February 2020 convicted the lawyer for trying to extort millions of dollars from Nike Inc., and he was sentenced to 2 1/2 years behind bars. A third criminal case, in California, where he’s accused of embezzling millions from other clients, ended in a mistrial in August.