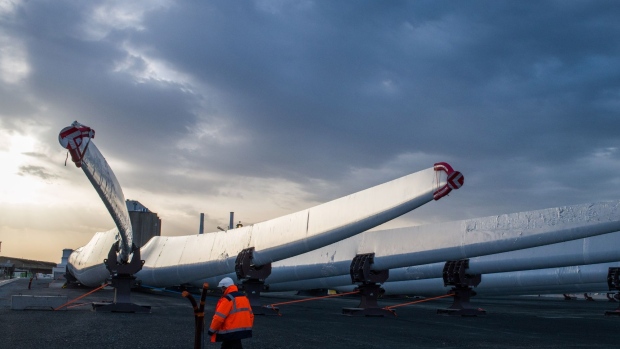 A worker passes wind turbine blades at the Siemens Gamesa Renewable Energy SA plant at the Port of Le Havre in Le Havre, France, on Monday, April 11, 2022. French government coffers are getting a boost from renewable energy as record power prices reduce state subsidies and even trigger reimbursements from the industry, the country’s wind trade group said. , Bloomberg

(Bloomberg) -- Siemens Energy AG will offer to buy the shares in Siemens Gamesa Renewable Energy SA it doesn’t already own, a long-awaited step in its efforts to turn around the troubled Spanish wind-turbine maker.

Siemens Energy has agreed to offer 18.05 euros per Siemens Gamesa share to fully acquire the company, it said on Saturday. Siemens Energy already owns 67% of the firm, which currently has a market value of 11.4 billion euros ($12 billion), according to data compiled by Bloomberg.

Gamesa’s shares surged more than 18% since Bloomberg reported Wednesday that Siemens Energy is weighing a full takeover with a view to delist the firm -- a plan the company later confirmed.

Speculations about a full takeover have been swirling for months. Project delays and cost overruns have mounted at Siemens Gamesa, triggering several profit warnings and a suspension of its guidance as the operations are bleeding cash. The issues are so dramatic that they have eroded investor trust and raised the prospect that Siemens Energy might tighten its grip on the unit to address the problems.

Siemens Energy’s bid represents only a small premium over Friday’s closing price of 16.745 euro per Siemens Gamesa share. In line with market rules, it’s above the target’s weighted three-month average share price, which is around 16.50 euros.

Turbine makers are facing rising costs for energy, steel and copper as well as supply-chain disruptions that are squeezing profits. The core of Siemens Gamesa’s problems is in its onshore division, where the company has been facing difficulties scaling up its new turbine model, dubbed the 5.X platform.