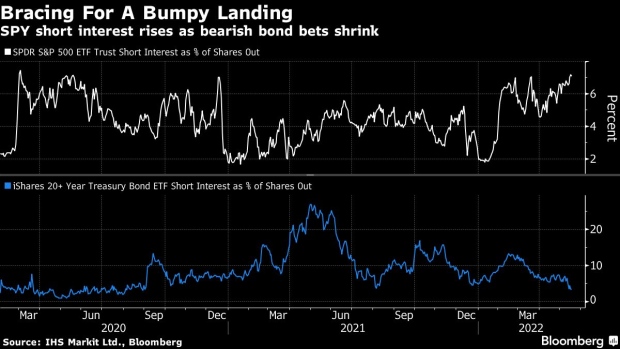 (Bloomberg) -- High-profile warnings over a possible US recession has investors bracing for a slowdown.

Short interest in the $352 billion SPDR S&P 500 ETF Trust (ticker SPY) as a percentage of shares outstanding is above 7%, close to the highest since March 2020, IHS Markit Ltd. data show. Meanwhile, bets against the $19.5 billion iShares 20+ Year Treasury Bond exchange-traded fund (TLT) have shrunk to just 3.5%, the lowest since September 2020.

The dynamic highlights the building anxiety over the US economy as price pressures boil over. Federal Reserve chairman Jerome Powell said Tuesday that “growth has to move down” for inflation to cool, and as a result, there “could be some pain involved” in restoring price stability. While that environment would likely benefit long-dated Treasuries, equities would struggle, according to Peter Tchir of Academy Securities.

“We are starting to shift from ‘inflation’ fears to ‘recession’ fears, so I think that positioning is consistent with a ‘recession’ outlook,” said Tchir, the firm’s head of macro strategy. “I think ‘recession’ is premature, but it’s something I’m seeing more people talk about and put on trades to reflect.”

SPY has dropped 18% so far this year, with the S&P 500 close to bear-market territory. The hottest inflation readings in four decades has TLT lower by more than 20% in 2022, though a bid has returned to bonds over the past week amid the market turmoil.

More than $32 billion has been pulled from SPY alone this year, putting the world’s largest ETF on track for the worst year of outflows ever. On the other side of the trade, more than $49 billion has flooded into fixed-income funds even though roughly 96% of bond ETFs have posted year-to-date losses.