Traders betting against stocks have generally done well this year, with bearish wagers against crypto shares proving to be a major standout.

Short sellers in digital-asset stocks have gained an average of 130 per cent in 2022, according to Ihor Dusaniwsky, head of predictive analytics at S3, a technology and data-analytics firm. By comparison, wagers against the automobile and software sectors have returned about 50 per cent, while retailing, media and entertainment have seen gains of about 46 per cent each.

“None of these industries can hold a candle to short sellers in the crypto sector,” wrote Dusaniwsky in a note last week. 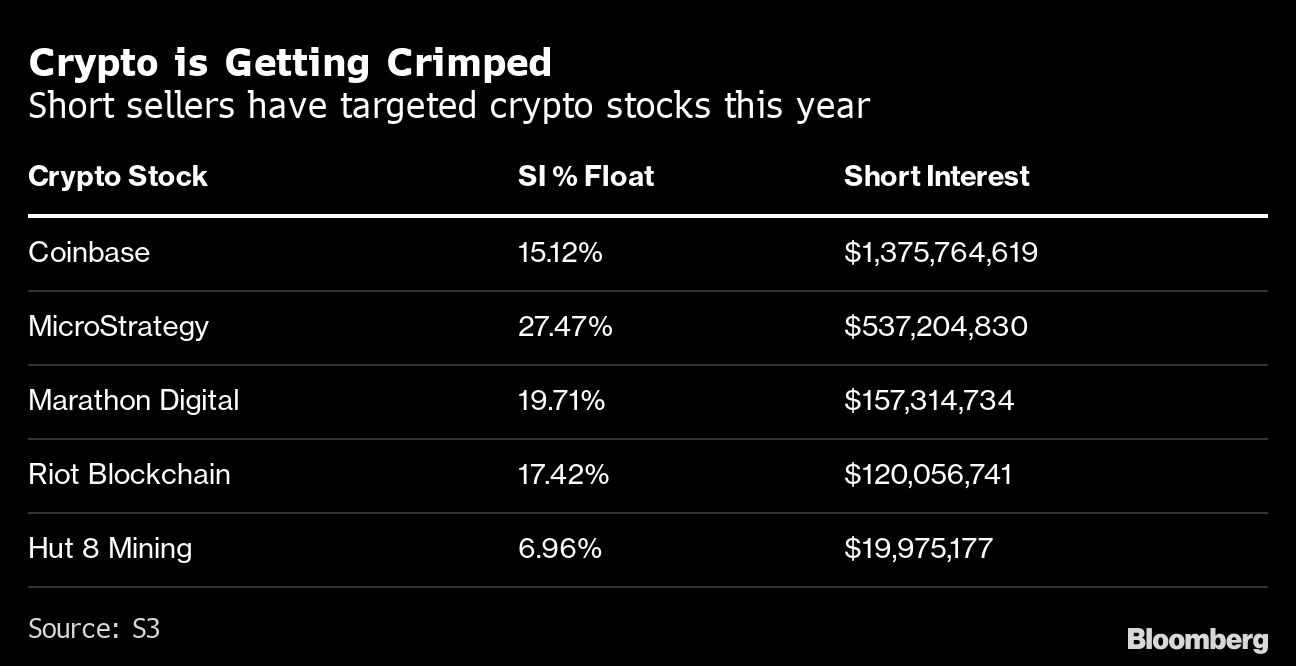 Digital assets have been rocked by a more restrictive Federal Reserve policy and stock volatility, while being beset by a number of hacks and scandals. Bitcoin, the largest digital token by market value, has plunged 50 per cent since the end of December, while Ether has shed about 70 per cent.

In this environment, crypto-linked shares like Coinbase Global Inc. and MicroStrategy Inc. have not fared well either. The crypto exchange is down nearly 80 per cent this year, while shares of the software firm have slumped 66 per cent.

Among the publicly traded crypto firms that S3 tracks, Coinbase tops the list in terms of the dollar amount shorted -- about US$1.38 billion -- with more than 15 per cent of its tradable float shorted, according to the data from the firm. Short interest as a percentage of shares outstanding for MicroStrategy stands above 27 per cent, with US$537 million shorted.

Many Bitcoin investors have been selling in this environment as prices continued to drop over the past few months. The coin over the weekend fell to around US$17,700, the lowest level since the end of 2020. Overall, digital-asset investment products saw outflows of around US$39 million last week, with total assets under management now at their lowest since February 2021, according to data compiled by CoinShares.

Last week’s plunge in Bitcoin took the token below its 2017 peak, and the coin traded below its 200-week moving average for only the second time in its history, according to Vetle Lunde at Arcane Research. “US$20,000 remains the most critical support level to pay attention to onwards,” the analyst wrote in a note.

Yet for short sellers looking to still benefit from the drawdown in crypto, it might be too late.

“With the pool of stock borrows in these names limited, due to lack of sizable ownership in the funds of the largest and most-active stock lenders on the street, prospective short sellers may be late to the party,” Dusaniwsky said. “While the crypto stocks’ negative price momentum may not over, the ability to short stock in size may be over.”