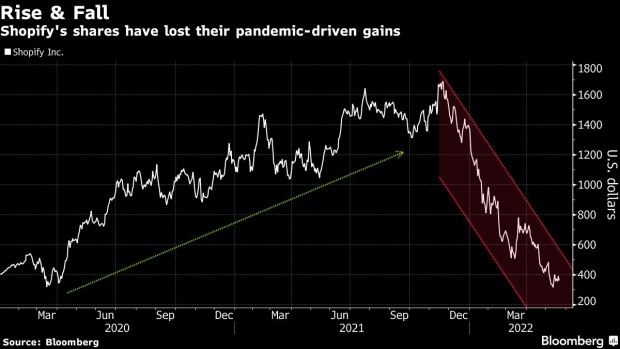 Signage on Shopify headquarters in Ottawa, Ontario, Canada, on Thursday, Feb. 17, 2022. Canadian e-commerce company Shopify Inc. had the average price target on its shares slashed to the lowest level since January 2021 after it signaled slower sales growth. , Bloomberg

The plan by the e-commerce company carries “inadequate protection” for the interests of minority shareholders and limits their rights, according to a filing Friday. “Ultimately, while we acknowledge the board’s concerns around the approaching sunset of the CEO’s effective controlling voting stake, we are not persuaded that the proposed arrangement is the correct solution,” Glass Lewis said in a note.

Shareholders will be asked to approve the plan at a meeting scheduled for June 7. Under that arrangement, Lutke, his family and his affiliates would together retain 40% of the votes at the company. Lutke would have to give up his founder share if he’s no longer with the company as an executive, director or consultant, Shopify had said in a statement last month. He wouldn’t be allowed to transfer it to anyone else.

He would also forfeit the special share if his ownership stake -- including family members and affiliates -- drops below 30% of the number of class B shares they currently have. Shareholders will also be voting next month on Shopify’s plans for a 10-for-1 stock split for its common stock that it said “will make ownership more accessible to all investors.”

Representatives for Shopify and Glass Lewis couldn’t be reached outside of regular business hours on Friday evening.

The new structure would shield Lutke and Shopify from shareholder activism amid a nearly 80% stock slump from its November peak. Lutke said last week he had placed an order to purchase $10 million of Shopify’s shares.

Its shares received a huge lift when the pandemic hit in 2020 and consumers turned to online shopping. But they have given back those gains as investors retreated from high-valuation stocks amid rising interest rates and slowing growth outlook.

Earlier this month, Shopify reported quarterly revenues and profits that fell short of expectations and gave a weaker outlook for adding new business customers in 2022.