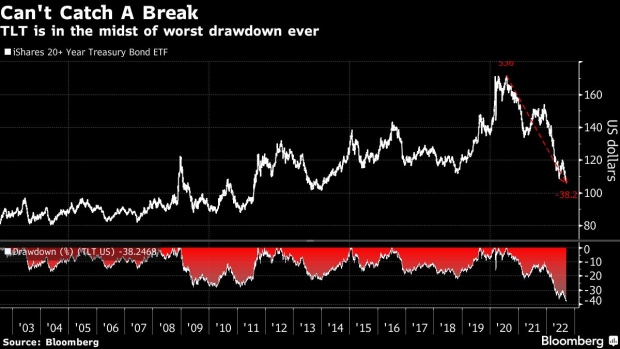 (Bloomberg) -- A brutal wipeout in a $25 billion bond exchange-traded fund has investors wagering that the worst is over on the eve of a crucial Federal Reserve decision.

The price of the iShares 20+ Year Treasury Bond ETF (ticker TLT) has plunged 38% from its August 2020 peak in the biggest drawdown since the fund’s 2002 inception, according to Bloomberg data. Meanwhile, IHS Markit Ltd. data show that short interest as a percentage of TLT’s shares outstanding dropped to a record low of 0.15% on Monday, after reaching 13% earlier this year.

Taken together, the stats suggest a desire to wade back into Treasuries as the Fed takes aim at the hottest inflation in a generation. Sky-high price pressures have roiled the fixed-income markets, dragging down the likes of TLT. However, as concerns build that tamping down inflation will come at the expense of economic growth, soaring Treasury yields look like an entry point, according to Richard Bernstein Advisors. Layer on expectations for a rocky corporate earnings season, and the Treasury market’s haven appeal is even more alluring.

“No one is willing to bet on higher rates when growth is rolling over and the Fed is hellbent on slowing the economy and inflation,” said Michael Contopoulos, director of fixed income at Richard Bernstein Advisors. “The fact this is all happening as we’re about to enter an earnings recession, just makes investors even more gun shy on shorting the long end.”

TLT’s price has slumped nearly 29% so far in 2022, putting the ETF on track for its worst year ever. Despite the abysmal performance, investors have poured nearly $12 billion into the fund year-to-date -- also an annual record. It’s a similar dynamic across the bond ETF arena, which has absorbed $118 billion of inflows this year even though almost 95% of funds nursing losses.

The Fed is widely anticipated to unleash a third consecutive 75-basis point hike at Wednesday’s meeting, alongside policy makers’ fresh projections for the economy. However, traders priced in the possibility that the central bank could raise rates by a full percentage point after inflation data for August came in hotter than anticipated.

While ETF traders appear poised to buy the dip in bonds, Todd Sohn of Strategas Securities says such a move would be premature.

“Perhaps some out there believe the worst of the drawdown is done,” said Sohn, ETF strategist at Strategas. “But if we still have more surprises -- pick a reason: inflation, geopolitical issues, et cetera  -- then there’s another leg lower to go.”