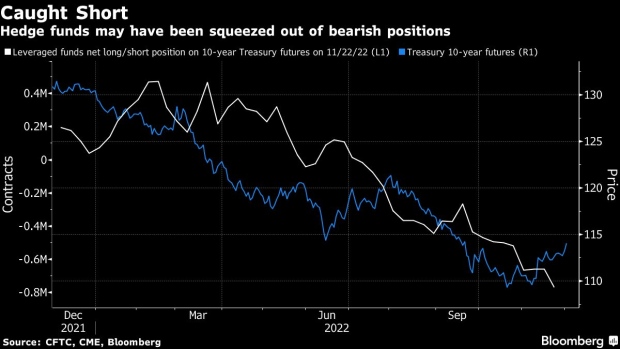 (Bloomberg) -- Treasuries jumped by the most in almost three weeks on Wednesday following a speech from Federal Reserve Chair Jerome Powell, but the rally may have been more about month-end positioning, according to market participants.

“The market reaction overnight was a touch surprising -- it seemed aggressive,” said Stephen Cooper, head of Australian and New Zealand fixed income in Sydney at First Sentier Investors, which oversees the equivalent of $6.8 billion. “We’ve seen over the last 12-to-18 months that, funnily enough, news that you don’t think is actually new sees market reactions which are out of size. It all just feels position based.”

Powell was widely seen to have cemented expectations the central bank will slow down its aggressive tightening this month, in a speech at the Brookings Institution. Yet he also said that rates are expected to reach a “somewhat higher” level than officials estimated in September, and the inflation outlook remains uncertain.

US 10-year yields tumbled 14 basis points Wednesday to close at 3.61% in New York. They climbed back up to 3.63% in Asian trade Thursday.

Swap markets are now suggesting the key overnight rate may peak below 5%, and markets are pricing in an increase of half a percentage point this month. That would push up the Fed funds rate to 4.50%, capping the steepest annual increase on record.

Powell’s speech touched on many of the themes that have underpinned the Fed’s hawkish stance this year, and he emphasized there’s still a lot of work to do to get inflation down to acceptable levels, according to Stephen Stanley, chief economist at Amherst Pierpont in New York. “I am at a loss to figure out exactly what Powell said that would be more dovish than what the markets were pricing in before,” Stanley wrote in a note.

There were signs the bond market was skewed to the bearish side before Powell’s speech, which may have then exacerbated the rally that started after he struck a relatively optimistic tone about the potential to avoid a recession.

Hedge funds had entered some of the largest short positions in years on 10-year Treasury futures before Powell’s speech, which may have then exacerbated the rally that started after he struck a relatively optimistic tone about the potential to avoid a recession. Yields had backed up earlier in the week as Amazon.com Inc. led a slew of corporate issuance that spurred traders to sell Treasuries to hedge their positions.

Waves of buying hit Treasury futures into the close of Wednesday’s session, underscoring the potential that traders were preparing for a rebalancing in benchmark indexes that will extend the duration they need to hold in the new month.

“There’s effectively been one theme going on, and everyone’s positioned one way,” said Cooper at First Sentier, referring to market behavior this year. “And then it changes and everyone floods back the other way, and that’s kind of what we saw overnight across multiple asset classes.”