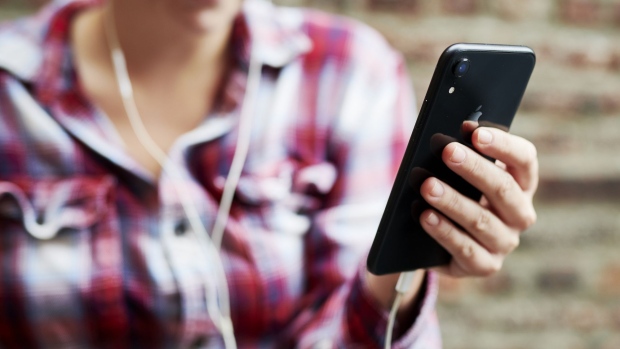 A person listens to a podcast on a smartphone in an arranged photograph taken in the Brooklyn borough of New York, U.S., on Tuesday, Sept. 29, 2020. Record labels, streaming services and TV networks are all commissioning original podcast series, hoping to tap into the growing audience for on-demand audio. , Bloomberg

(Bloomberg) -- In January, the staff of Mercy Hospital in Coon Rapids, Minnesota, was flooded with tens of thousands of angry phone calls, all with the same concern. Calling in from as far away as Australia, the people were worried that an unvaccinated Covid-19 patient was getting a lower level of care, and wanted to ensure he would be transferred elsewhere.

Mercy eventually transferred the patient to a Texas hospital. But in the meantime, administrators increased security, and the staff had to set up a new phone system so that unrelated inquiries about patient care could still get through, according to a person familiar with the matter. Tensions grew among staff, who feared that they were going to continue being targeted by furious callers no matter what they did, the person said.

The source of the outrage was a popular podcast called The Stew Peters Show, which, after hosting the patient’s wife, asked its listeners to call the hospital and apply “social pressure,” alleging that Mercy was treating the unvaccinated patient unfairly while pushing back against the idea that a Covid-19 vaccine could have helped with severe illness from the virus. At the time, Mercy was dealing with one of the pandemic’s worst surges of Covid-19 in the state. All beds at Mercy’s intensive care unit were in use back then, according to data gathered by USA Today’s network of local newspapers.

It’s one of several podcasts, distributed through major platforms such as Apple Inc. and Alphabet Inc.’s Google, which have encouraged listeners to direct anger at health-care workers, according to new research from the Tech Transparency Project. In an analysis published Thursday, the nonprofit group also documented the spread of monkeypox conspiracies and a large volume of Covid-19 misinformation through audio content.

The research, based on a collection of 401 episodes TTP gathered that aired between February 2020 and June 2022, underscores the extent to which misinformation and provocation can proliferate on podcasts, which are distributed to millions using platforms operated by tech giants — often with little content oversight. Apple’s podcast guidelines state that the company prohibits “content that may lead to harmful or dangerous outcomes,” while Google says it won’t promote podcasts that include “harassing” and “hateful” content, or podcasts that depict “deceptive practices.” But the companies continue to distribute such podcasts, even when competing platforms have removed them.

Apple distributing such podcasts “shows how the company’s lofty talk about corporate responsibility often fails to translate into concrete actions in how it runs its business,” the Tech Transparency Project said in its report. “In the case of podcasts, Apple is allowing a huge body of misinformation about the coronavirus to reach its listeners, endangering the public at large.”

Four episodes that encouraged directing anger at healthcare workers, despite being removed from Spotify were still distributed through Apple Podcasts and Google Podcasts, according to TTP. The Stew Peters Show, a program hosted through a service called Podbean and that has ranked as high as No. 48 in Apple’s most popular US political podcasts in September, according to data from Chartable, was behind three of the four documented incidents. In one case, the wife of the unvaccinated patient at Mercy Hospital joined Peters on a January episode. She played the recording of a call in which doctors informed her of their decision to remove life support. At the time, she pushed back against the idea that a Covid-19 vaccine could have helped her husband.

“These people are cold-hearted,” Peters said in response. “Cold-blooded killers are what they are.”

He then encouraged listeners to call up the hospital. When the episode was posted on Apple Podcasts, the description included individual workers’ names and phone numbers, which TTP says violates Apple’s rule to prohibit content that is “likely to humiliate, intimidate, harass or harm individuals or groups.”Apple Podcasts declined to comment. A Google spokesperson said its podcast product crawls and indexes audio content hosted on third-party servers and the open web. “Like Search, our systems are designed to surface high quality results and we have established policies against recommending content containing harmful misinformation,” they added. The episodes flagged by Bloomberg are not recommended by Google Podcasts.

Allina Health, which oversees Mercy Hospital, said in a statement that privacy laws prohibit it from commenting on the care provided to specific patients. But a spokesperson added that the company “has great confidence in the exceptional care provided to our patients, which is administered according to evidence-based practices by our talented and compassionate medical teams.”

In another episode that same month, Peters called medical staff a “coronavirus death cult” and encouraged listeners to “flood” a Virginia hospital’s phone lines. During a third episode in January, he called a pediatrician a “murderous tyrant” while simultaneously promoting an unproven “Z-Stack Protocol” from Vladimir Zelenko to protect against Covid-19 vaccines that become “self-spreading bioweapons threatening the purebloods.” TTP said episodes of The Stew Peters Show are routinely removed as newer ones are added on Apple and Google Podcasts, where the show’s archive only goes back to May. The group included text descriptions and screenshots of the episodes on Apple Podcasts in its report. Bloomberg reporters verified the quotes by listening to the episodes available on Peters’s show archive on his website.

“Our efforts have always been about saving lives,” Peters said in an interview. The show has been mischaracterized, he added, and “has never harassed anybody. We want to hold to account these death panels.” He later added, in an email: “I categorically reject that I, Stew Peters, or anyone at the Stew Peters Network has harassed ANYONE, at ANY TIME.”

A separate Podbean-hosted podcast, SGT Report’s The Propaganda Antidote, has been banned by Twitter and YouTube but remains on Apple and Google Podcasts. Since January, according to the TTP’s report, show host Sean Turnbull mentioned one pediatrician 13 times on his show who he says concealed the Covid-19 vaccine’s effects on pregnancies. On a livestream, he also showed a picture of her face along with information on her workplace, including its address and phone numbers. Bloomberg reporters watched a copy of the livestream and verified TTP’s findings. A Podbean spokeswoman said she wasn’t aware of any reports made about SGT Report’s or Stew Peters’ show.

TTP also collected a number of examples in which several popular podcasts spread unverified origin stories about the monkeypox virus. In a May episode of The Stew Peters Show, Peters stated that “globalists were plotting the course of a monkeypox outcome at this exact time a year ago.” In a June episode of The Highwire with Del Bigtree, the anti-vaccine activist Del Bigtree pushed the notion that monkeypox is a tool by governments to oppress their people. Bigtree’s show is hosted on Spreaker, an IHeartMedia-owned platform. There is no evidence of a global conspiracy to plan the monkeypox pandemic.

“When monkeypox came along I simply warned my audience to keep an eye on the coverage,” Bigtree said in response to TTP’s report. “I hypothesized that the same tech and pharmaceutical industries, along with world and federal agencies may attempt to use the ‘opportunity’ provided by the monkeypox outbreak to try again to install vaccine mandates, cell phone tracking systems, and other familiar Draconian measures.”

Francesco Baschieri, head of Spreaker parent company Voxnest, said because of the large number of shows that use Spreaker as their hosting tool, including Bigtree’s, the team, “obviously cannot preemptively check each and every new episode for all of these violations. But we do react strongly when we become aware of them.” He said the team is looking into whether Bigtree’s monkeypox statements violate its terms, which don’t allow podcasters to publish content that harms others.

(Updates with a response from Del Bigtree in the fifteenth paragraph)