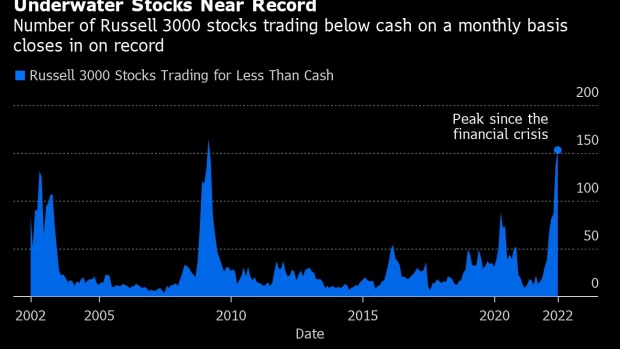 (Bloomberg) -- The number of Russell 3000 companies, excluding financial firms, trading below cash has surpassed the month-end record set during the global financial crisis.

As of Wednesday’s close, the market capitalizations of 167 Russell 3000 companies, including three major airlines, were below the firms’ cash holdings. The monthly record was 165 in February 2009.

The spike comes as the US stock rout is showing no signs of easing with the Russell 3000 index down another 3.5% Thursday to the lowest since 2020. However the metric -- which indicates a company’s total equity value is less than its cash and marketable securities -- could be a sign there are bargains to be found.

A recent Markets Live analysis showed an unprecedented number of biotech firms was underwater. That number has climbed to an astounding 110 out of 370 Nasdaq Biotechnology Index members.

Back when the record was last set in 2009, the amount of companies underwater represented about $43 billion of market value; now it’s more than $55 billion. Here’s a look at the monthly numbers:

NOTE: This was a post on Bloomberg’s Markets Live blog. The observations are those of the blogger and not intended as investment advice. For more markets analysis, go to MLIV.